Valkyria Chronicles is one of the early titles in the PlayStation 3 library, and was one of the first games I bought after getting a PS3. While I checked it out immediately and found it interesting, I didn’t get to play through it until recently. This coincided with the relative recency of its release on the PC platform through Steam, and the even more recent PS4 “Remastered” version. Valkyria Chronicles is a game about war, and, like most works of fiction focused on war, it carries a strong anti-war message. War turns people into beasts, as they are forced to kill to survive… This message must persevere in today’s world of video games and overall comfort, lest we forget it and return to the horrors of war again. 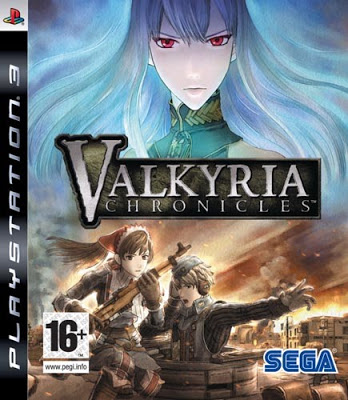 FIGHT TO PROTECT YOUR COUNTRY 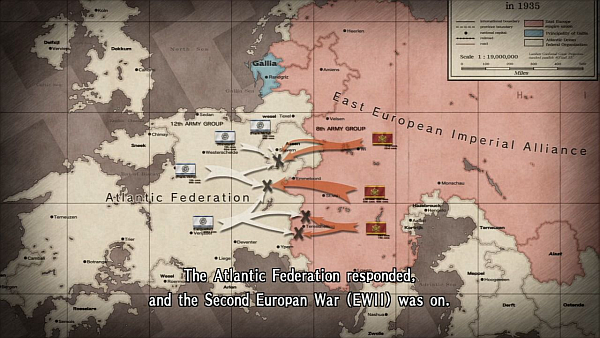 The peaceful nation of Gallia that tried to stay neutral during a brewing Second “Europan” War between the “Atlantic Federation” and the “East Europan Empire” gets invaded by the Empire (of course) because it’s rich in natural resources (primarily ragnite, a mineral with highly sought-after qualities). As fate would have it, the first town to be attacked is Bruhl, our protagonist’s home… And Welkin Gunther is not just some random country boy – he is the son of renowned general Gunther who was a Gallian hero during the First Europan War… Welkin hates war, but he has it in his blood, and there is no way around it – he must lead a militia brigade that takes care of lower-scale tasks that do not warrant the involvement of the army. But, you guessed it, things turn out so Welkin’s squad carries the heaviest burden of the conflict on its shoulders. 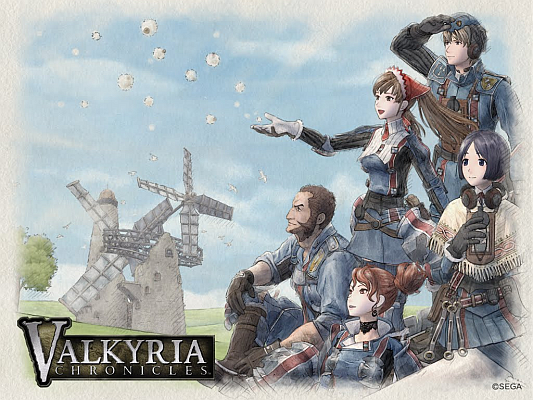 Gallia is quite clearly based on Holland, a.k.a. The Netherlands, as evident by its location on the map, the windmills, flowers, the country’s description, and especially the characters’ last names, some of them taken directly from Dutch footballers of the near past. Of course, during war, there’s some political play in the background that will become more apparent as you progress through the game, and there’s a nice anti-racism message delivered through a race everyone hates that’s different merely by being uniformly dark-haired, called the Darcsens. But the focus of the overall story remains war, and your squad’s involvement in it. There’s also a supernatural touch with the extraordinarily strong Valkyrian race… 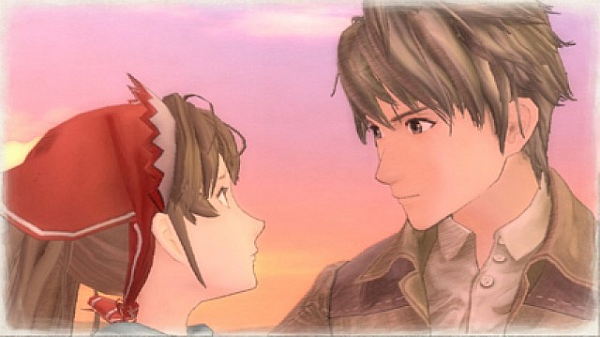 The characters give strength to a story that wouldn’t otherwise stand out. Welkin and Alicia, who is also from Bruhl, are the heart of Squad 7, with several people around them forming the complete picture. These are the kind-hearted Darcsen enginner Isara, who is in essence Welkin’s sister (though not in blood), the war veterans Largo (the squad’s big guy) and Rosie (who is also a great singer), the squad’s direct commander – a strict woman named Varrot, and Faldio, a good friend of Welkin’s who is popular with women. The rest of the squad are “randoms” you can even exchange, but I did take a liking to Nadine, a cute Darcsen engineer. And there’s a neat cameo of Vyse and Aika from Skies of Arcadia, who just appear in your squad. It won’t take one long to figure out Welkin and Alicia will fall for each other as the story develops, and their love story is the highlight of the game, maybe because of the circumstances in which it blossoms. The villains are nothing to write home about, though Maximillian, the main commander of the invading army, is pretty cool, if a bit of a generic “the end justifies the means” guy. 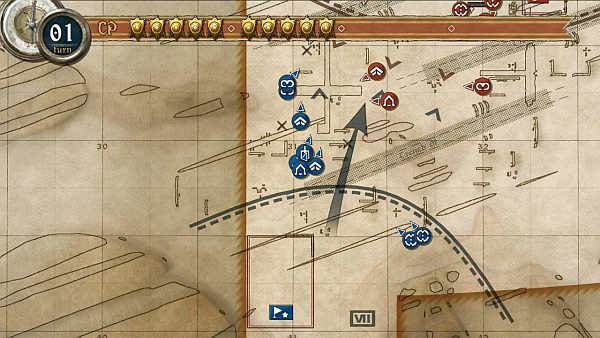 Valkyria Chronicles is about tactical battles. SEGA went with an interesting approach, combining elements of the tactical RPG genre with the aesthetics of a real-time third-person shooter… The result is fun, truth be told, but feels off because the visuals make the player expect something quite different from what the battles in essence are – turn-based. It’s a hard to suspend disbelief. During your attack phase, you run around freely and shoot people (and tanks), and they only fight back if they are attacked (and survive your attack) or if you run too close to them… That’s obviously nothing like a real war where you’ll get shot down the moment you leave your cover. During your defence, the enemy does the described above, so you’re, in a way, left to the AI’s mercy. Of course, if you take measures to get everyone safely behind cover prior to ending your turn, you should be fine. 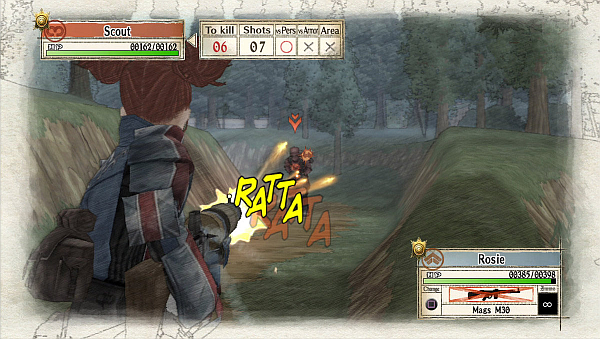 There are four types of soldier classes – scouts who can run far, but carry rifles that can only make 5 shots at a time, shocktroopers that have much more damaging automatic weapons, but can’t run that far, snipers who can shoot at people from afar, lancers who carry explosive weapons to deal with tanks, and engineers who repair tanks. The last two classes perhaps hinted you that tanks are a main part of the game’s warfare – Welkin is a tank commander, and will be responsible for lots of the damage you’ll be dealing to your enemies. Tanks have a huge weak point – the ragnite engines on their backs. A single lance can usually destroy those, and your tank with them, so it’s very important to finish your turns pressing the tank’s back against the wall or at least as far from the enemy’s reach as possible. 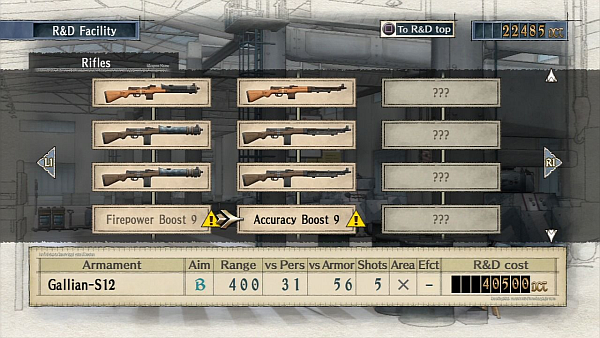 Between battles, you can upgrade your classes’ abilities spending experience points you’ve earned, you can upgrade your weapons with the money, and you can exchange your squad members if you’d like. There are also orders to be learned – they give you some extra possibilities in battle. You must avoid getting your soldiers killed – fortunately, the game is quite forgiving, and, if you reach someone who’s been shot down before an enemy does, you call a medic who rescues them, and you can even re-deploy them on the battlefield 2 turns later. But getting Welkin’s tank destroyed means immediate game over. Fortunately, you can also save at any time – a very strong point of the game. So, when you’ve made good progress in a battle, you can save and avoid having to start all over from the beginning just because some lancer shot Welkin’s tank’s engine. This is very precious because many battles last over an hour. 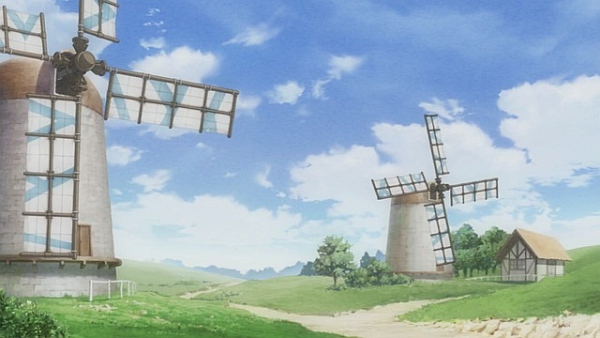 Valkyria Chronicles has really pretty cel-shaded art style. It’s still quite beautiful to look at 8 years later. Given that, I’ll forgive the fact that most cutscenes are just semi-static images, combined with voice acting. There are a handful of fully animated, beautiful exceptions. Speaking of voice acting, I played with Japanese voices, and they are excellent. Using that option (with English subtitles) is pretty neat. As for the soundtrack (written by tactical RPG veteran Hitoshi Sakimoto), while there is nothing I’d immediately add to my game music collection, there are a bunch of songs that really fit the mood of the game. The one I chose as part of the review is an upbeat theme with a military feel, called “Daily Life of Squad 7”.

Valkyria Chronicles is well worth playing, for fans of the tactical genre and general JRPG fans alike. It tells the story of a country fighting for its survival against a powerful empire, which is not particularly original and a bit of a throwback to the RPGs of old, but the likeable characters and the anti-war messages make it good. Now that it’s also on PC and regularly on sale, it’s even easier to play it. Its likeable characters, original and fun battle system and beautiful art are more than enough to overlook the relative silliness of how battles look.