I had been looking to get into the Shadow Hearts series – one of the few RPG series left that I saw potential in to cater to my love for thought-provoking stories, for a while now. I started with its roots – the PlayStation game Koudelka, Sacnoth’s initial endeavour and Hiroki Kikuta’s brainchild. It was impressive for its time, with pretty good atmosphere (particularly the horror setting), music, voice acting, puzzles, and a fun battle system with a tactical touch. Over a year passed until I finally got to the first Shadow Hearts game, and I met Yuri Hyuga – a far more engaging protagonist than Koudelka could ever hope to be. But Yuri is not the only highlight of this remarkable game. 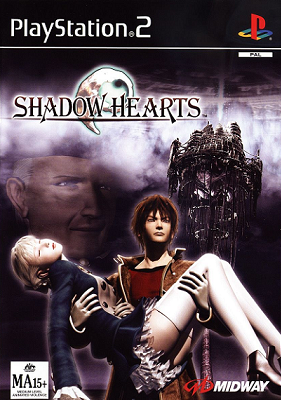 Shadow Hearts stays true to general JRPG roots, but introduces plenty of innovative things and just general neat touches that enhance the experience a lot. It’s the little things that count. The battle system is no longer tactical, but turn-based, and relying on the “Judgement Ring”, which requires good timing of button presses for you to land your hits. The story is much more engaging than Koudelka, now taking place in several regions in the world rather than confined to one monastery. Yuri also meets a number of other interesting characters on his journey, and their interactions with one another are quite fascinating. As a whole, it is a game that JRPG fans will truly appreciate, and the solid story could draw even people who aren’t that keen on the genre. 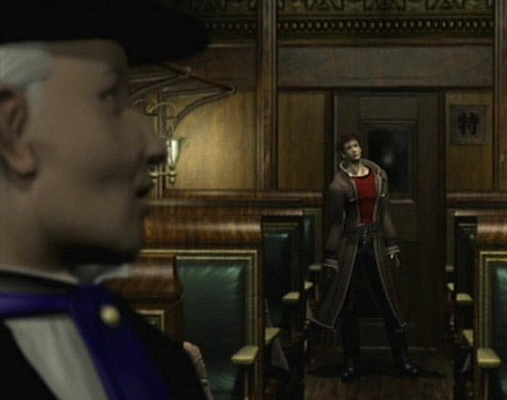 Shadow Hearts tells a most interesting tale, starting on a train somewhere in China, with an extremely flashy and eye-catching opening FMV sequence. We meet the cocky protagonist, a villain, and the girl we must protect. Despite the villain’s incredible power, Yuri, our “rude hero” with supernatural powers, manages to rescue Alice, and their adventure together begins. A strange voice in Yuri’s head has guided him to protect this girl, and keeps helping him during his adventure. But the villain, a mysterious man called Roger Bacon, has naturally not given up, and the intro sequence will not be the final encounter of those three. 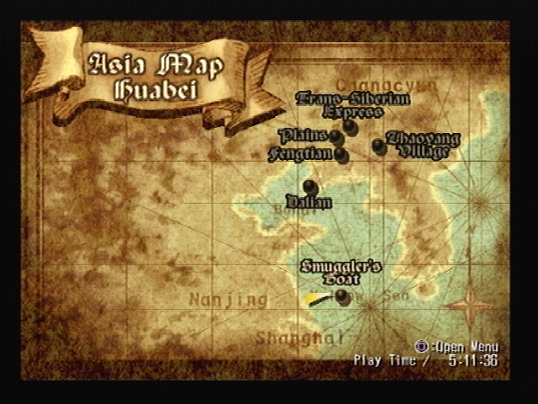 Shadow Hearts takes place in the early 20th century, in a rather grim world tortured by demonic powers. Yuri is far from the only person who possesses such frightening strength. To make things worse, the Japanese military are making their move in China, and war is right around the corner. Despite these dire circumstances, friendship and loyalty between people can still bloom, and Yuri and Alice soon meet some allies who prove worthy of their trust, and help many people in need. There are quite a few stories of smaller scale going on as the party are on their adventure, ones that you will surely find personally touching. 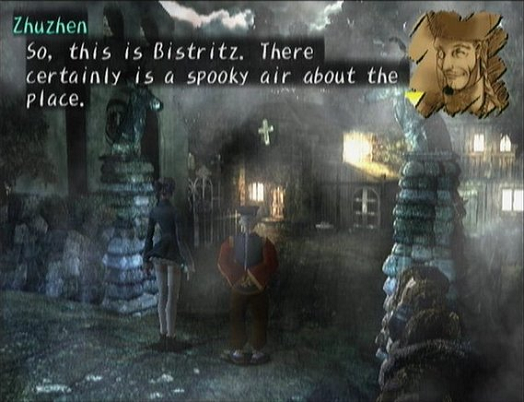 A sequel true to Koudelka, Shadow Hearts keeps the supernatural atmosphere prevalent, though is, of course, a bit less heavy on it, given that it takes place in various locations, as opposed to the single location of Koudelka. You will find plenty of odd things in this game, odd even when you’re already aware of the supernatural premise. There are some unexpected revelations along the way, and there are some unexpected treats, as well.

A LEAGUE OF UNLIKELY ALLIES 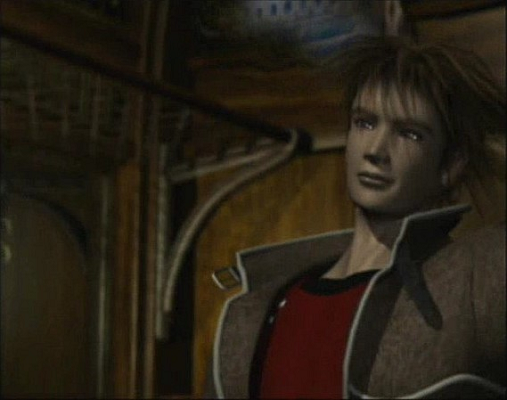 Yuri Hyuga, the main character, is a Harmonixer – a human being with fusion powers. In battle, he can transform into several different demon forms. This does not come for free, however – each transformation takes a toll on his psyche. Aside from that, he has a really cocky and rather brash personality. Especially early on, he doesn’t quite treat Alice like a lady would expect to be treated, which makes for some fascinating exchanges and tension between them. Despite the rather rough exterior, Yuri has a good heart and tries to do what’s right, giving it his all. He truly is the life of the cast, having a different relationship with each of the party members. Interaction within the party is usually focused on him, whether he participates or not. 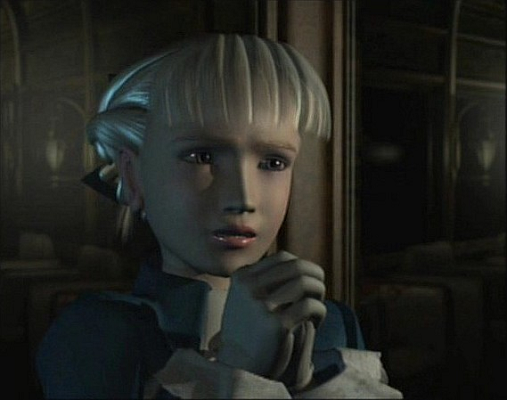 Yuri’s friends are quite different from one another. Alice is a calm, tender girl with tremendous magical powers, she’s the main healer of the party and, as such, perhaps not too different from the genre cliché in that role. But, as the story progresses, you’ll probably grow quite attached to her – the tenderness of her heart, her history and the love she shows for those around her, will quite likely win you over. She is a central figure in the story, as the intro already implies, her powers are highly sought after. Zhuzhen is a Chinese oracle, an elderly man with a great sense of humour. The dynamics between him and Yuri are always funny. These two are easily my favourites from the crew. The other teammates – the spy Margarete, the vampire Keith, and the young homeless boy Halley, are also cool, but Yuri, Alice and Zhuzhen are the heart of the party. 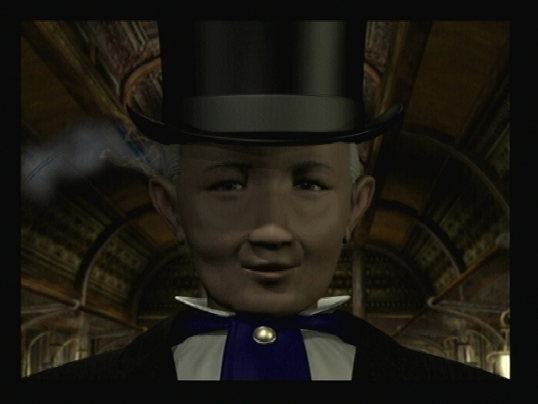 There are also other great characters in the game, particularly the aforementioned villain Roger Bacon, whose initial malice makes him seem quite one-dimensional, but we eventually find out that, like with most quality JRPG villains, there’s a reason for everything. Dehuai, a Chinese warlock, is another fascinating character, as is the Japanese military lieutenant, Kawashima, whose path crosses with the party’s several times, and who, unlike most military people, will not just blindly follow orders, but will rather try to apply some common sense and personal judgement first. 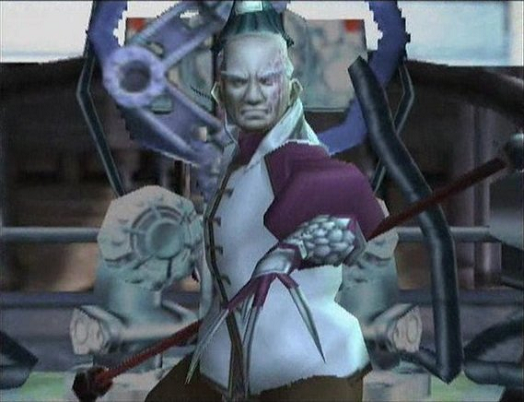 Pleasant surprises are to be found in the cast, too, especially once the connection between Koudelka and Shadow Hearts is established. 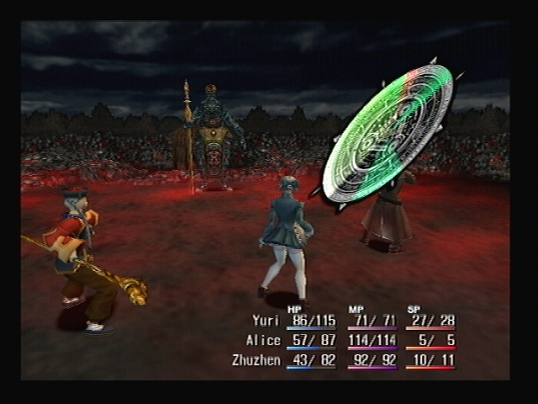 At first sight, Shadow Hearts is a rather typical JRPG in terms of gameplay. But you’ll find out very soon that there are some things that really set it apart from the rest. The biggest one is certainly the Judgement Ring system. Whenever you have to succeed at some action (not even just in battle, though, of course, mostly in battle), the Judgement Ring appears and the cursor starts to spin. There are one or more “success” areas that you have to land in by timing your button presses well. If you can’t, well, your action fails. Outside of battle, you have to make all hits successful to proceed; inside, it depends on the action you’re trying to perform – if it’s a normal attack, you can make up to three per turn, and, if, for instance, you hit two areas and miss one, you perform two hits. For spells, you need to first hit a narrow area that your spell succeeds at all, and then a wider one. Curative spells or items usually only require you to hit a relatively wide area once.

Battles in Shadow Hearts are turn-based, with characters’ agility determining their turn to act. Each character has unique special abilities – Yuri has Fusion, Alice has White Magic, Zhuzhen has Ying and Yang, etc. Those are just names for the characters’ specials. Once Yuri fuses into a monster, the monster has unique special attacks, depending on its elemental type. The game features 6 elements, in pairs that counteract each other – Light/Darkness, Earth/Wind and Fire/Water. Naturally, once you know an enemy’s element, you can win more easily by using attacks with the opposing element. Characters unlock new special abilities at certain levels. 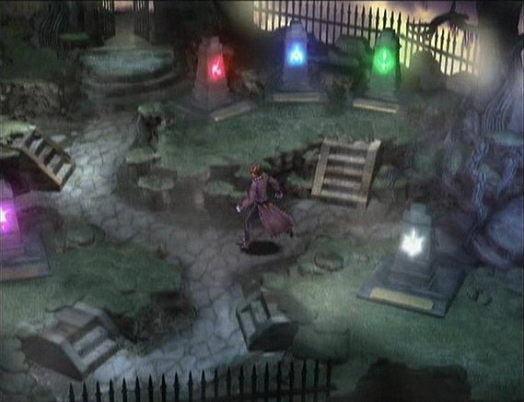 Yuri is an exception. He unlocks and adds new monsters in his Fusion arsenal by defeating monsters of the corresponding element to accumulate points, and then defeating the fusion monster itself in the Graveyard. The Graveyard is a special area accessible only to Yuri, representing his consciousness. There are gravestones corresponding to each of the elements, and, once a new fusion monster can be fought, the corresponding gravestone begins to glow. Yuri also needs to go to the Graveyard to calm down his Malice – a special attribute that accumulates the more he fights. If the Malice grows too much, Yuri can get in real trouble, as he will get confronted by his biggest fear – The Man with the Fox Mask. I always did my best to calm the Malice (you do it by fighting a monster at the Graveyard), as I didn’t want to meet him. 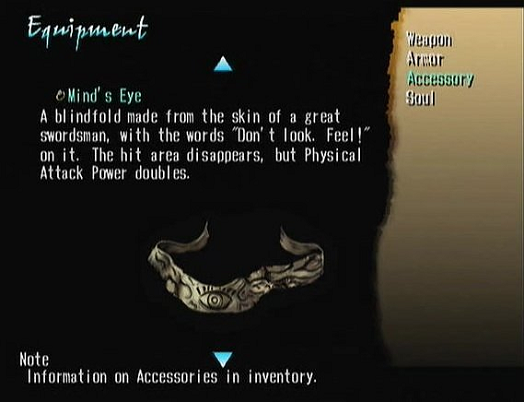 There isn’t much in terms of side quests and mini-games. There’s a lottery mini-game that I couldn’t actually try because, for some reason, it freezes the game when you’re playing on a PS3. Items are actually quite fun because each of them has an interesting description you can read. These descriptions are sometimes quite bizarre, and add quite a bit to the game’s world and atmosphere. Each character uses a different set of weapons – for example, Yuri has knuckles, Zhuzhen – a trusty rod, and Alice actually uses a selection of bibles to bash enemies with.

DARK ATMOSPHERE PLUS SOME COMEDY 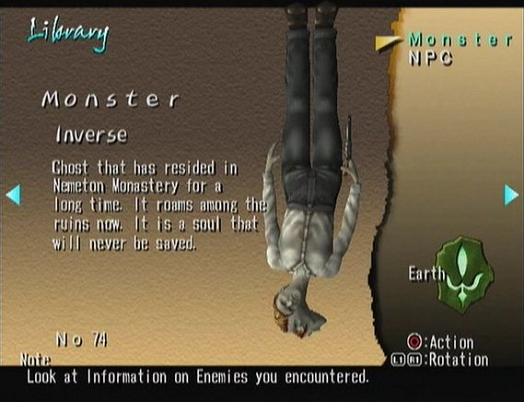 Speaking of enemies, the enemy designs are easily among the most distinctive things about Shadow Hearts. The designs stay true to Koudelka, with some even scarier ones (what with the better hardware available), and some, like the upside-down shooter, returning in full glory. The game’s atmosphere is particularly dark – the Graveyard I mentioned earlier (with its bizarre four mask creatures) being a non-brainer, of course. But the same goes also for the locations, especially the villages. As you often have to save these villages from evil spirits and the like, the atmosphere in them is quite gloomy. Naturally, the villains’ dungeons are also quite dark and desolate. 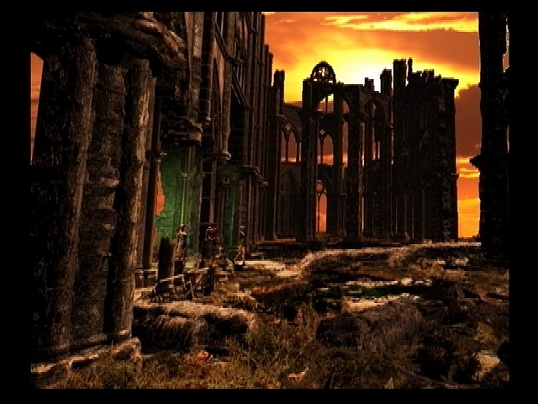 Despite all that, there are quite a few lighthearted moments in the game, especially in the conversations between characters. We see even perceived badass Yuri in some embarrassing situations, we see some quarrels in the party, and those things certainly help lighten up the otherwise gloomy mood. 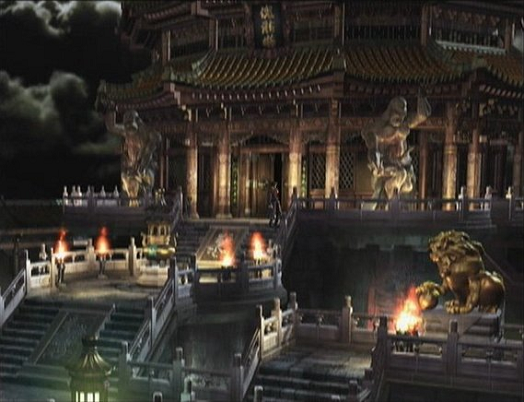 The soundtrack is also of very high quality, and adding a lot to the game like great soundtracks always do. It was composed by Yoshitaka Hirota, as actually his first major video game work, and Yasunori Mitsuda, composer of amazing music for classics such as Chrono Trigger/Cross and Xenogears and established as one of the best in the field. The songs really complement the dark atmosphere of the game, and, actually, most of them were done by Hirota. Still, my favourite track happens to be one of the only nine (out of over 60) done by Mitsuda – “Disaster ~ Psycho Temple”, which plays in the lair of one of the game’s major villains – Dehuai.

Sacnoth’s Shadow Hearts is a bold sequel that really builds upon Koudelka. One fascinating battle system was changed for another which, thanks to the Judgement Ring, managed to be even more fascinating, and simply quite good. PlayStation 2’s superior hardware allowed the artists to go even wilder with monster designs, and most of them do look reasonably scary, as opposed to Koudelka’s rather goofy looks of some of the monsters that were intended to frighten you, but couldn’t due to the lack of hardware power on the first PlayStation. But, most of all, the story, the main characters and the relationships between them, as well as the many small-scale conflicts the party resolve on their way, make Shadow Hearts really stand head and shoulders above Sacnoth’s first attempt.

Shadow Hearts is certainly one of the best PlayStation 2 games, and I highly recommend it to RPG fans – particularly ones that are not afraid to jump into a rather dark story. While it’s not a saga of the proportions as, say, Xenosaga or .hack, its fascinating world and loose basis in the actual history of the early 20th century certainly make it stand out among the rest. And most of all, Yuri is not a protagonist you will encounter often. I can’t wait to play the sequel!