In the last couple of years, I’ve been doing some catching up on great PS1 RPGs that I’ve missed over the years. We all know the first PlayStation is the definitive RPG game system, and I’ve of course played its Final Fantasies, Xenogears and Lunars (albeit the Mega CD versions) already. But there are still so many left. Parasite Eve is the game featuring our forum regular Ertyu’s favourite video game girl, Aya Brea, and its intriguing concept (a female detective fighting a biological menace for humanity) had me choose it as the next PS1 RPG to play after Grandia. 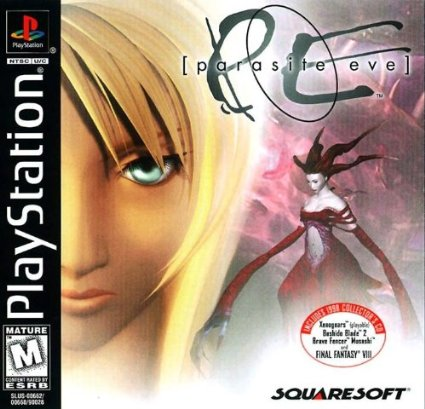 Parasite Eve is set in New York City or, more particularly, Manhattan, but it still feels very Japanese. This kind of hinders the goals it had set before itself, as it mostly fails to capture the atmosphere of a rather police-central story it is trying to tell. There’s Aya, there’s her partner Daniel, there’s the police chief Baker, and a few other cops working with Aya… But that’s where the similarities with Hollywood police films end. Storytelling remains very Japanese. Parasite Eve also offers an interesting battle system and weapon management, and several pretty nice tunes on the soundtrack. But the main premise and, particularly, the evil you are fighting in the game, make it pretty hard to suspend disbelief… As a whole, it’s a bit of a mixed experience, but the rewarding parts outweigh the bad.

SCI-FI OF THE RIDICULOUS KIND 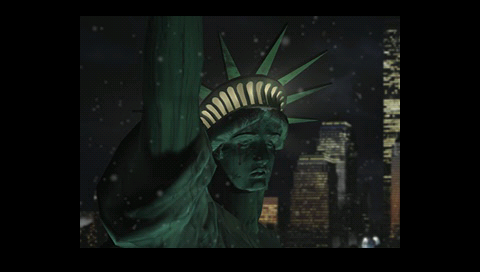 Parasite Eve is actually based on a book of the same name. I’ll doubt I’ll ever read that one to see how well the game adapted it, but I doubt the book could be much more impressive than the game. The very premise is too much – mitochondria within the human body rebel and want to take over the world. Their “leader,” Eve, is a conscious being taking over a human host in the very beginning of the game, starting to ignite people left and right, and Aya is somehow the only person immune to that ability. Naturally, she’s thus the only one who can stop Eve. You understand, it’s very hard to suspend disbelief for this game, so it lost many points already from the get-go. It was a shame, too, because everything else looked promising. 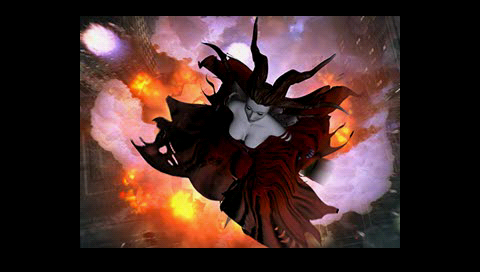 The ridiculous premise aside, the story isn’t half bad. It’s nothing fantastic, but it works relatively well. Kind of reminiscent of the Hollywood police story (except with saving the whole of humanity) they wanted to go for. There are some backstory details to be discovered, you will of course learn the reason for Aya being resistant to Eve’s powers, too. There are no huge twists, and the game will not keep you thinking about it even when you’re not playing, that’s for sure. But it works. Despite the Hollywoodesque aspirations of the authors, the storytelling and pacing remain strictly “Japanese RPG”, but that’s not necessarily bad. It just feels off when you know they weren’t going for this. The game might as well have been set in Japan. The background and Aya’s partner Daniel being black (another Hollywood cliché) are really the only American things about Parasite Eve. 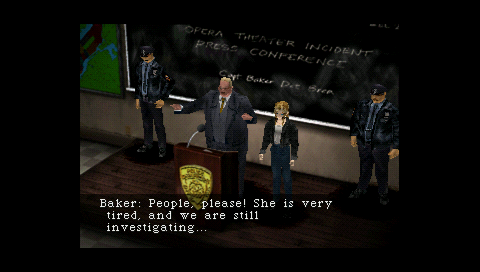 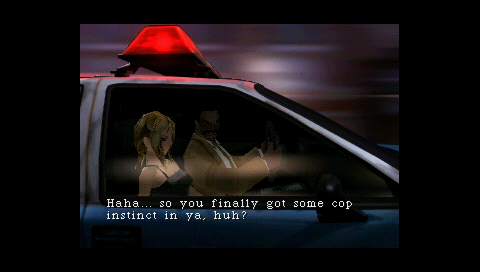 As I already mentioned, the cast contains everything you will be expecting from a police film – the protagonist and her partner, the other, “background” cops, the police chief that the two main characters are not that fond of… Well, instead of a criminal gang, Aya and Daniel have a supernatural being capable of wiping out humanity as the enemy, so it’s a more serious story. The game is supposed to also be kinda horror, I guess, but, aside from a few ugly monsters, isn’t really. Aya is a beautiful blonde detective who is also badass and isn’t afraid to confront this unimaginable evil. But she lacks depth. And the same goes for all other characters in this game. 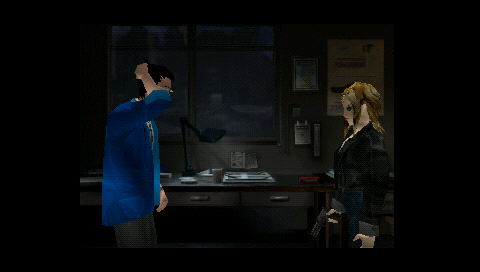 Daniel is a somewhat funny, but ultimately boring sidekick. The other cops are not even worth commenting on. Eve is a pretty typical villain who is practically born “evil” (so don’t expect any development) and fails to induce strong emotions within the player. And there is one member of the cast that is kinda off… Maeda – a Japanese scientist who somehow ends up in New York in the middle of this crisis. He becomes a valuable support for Aya with his knowledge and research abilities in relation to mitochondria. It’s funny that with all the effort to be like Hollywood they still couldn’t help including a Japanese person in the cast. 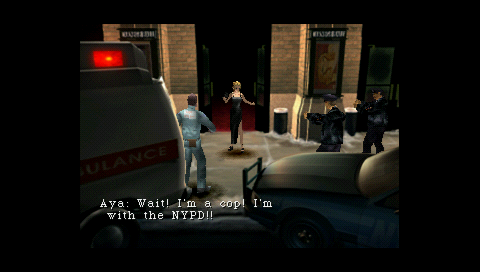 MIX OF ACTION AND TURN-BASED 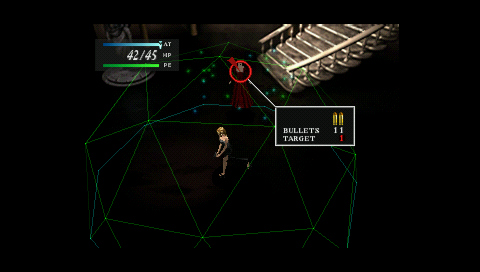 Parasite Eve’s battle system is quite interesting. It’s simple and works well, once you get the hang of it. You control Aya and she’s the only one doing the fighting. Whenever you fight, you have a limited movement space in which the battle takes place. You can move around and stop the action to shoot at your enemies (preferably within your weapon’s range, otherwise you’ll likely miss), or use items. You can also use special “PE” (parasite energy) moves, but I decided to be badass and not use them at all, instead relying only on my trusty guns and items to heal. I hear that’s how you HAVE to play in the not-so-popular third game in the series that came out a couple of years ago on PSP. Apparently, the game can actually be beaten that way, and I imagine it’s quite easy if you use Aya’s PE powers, too. 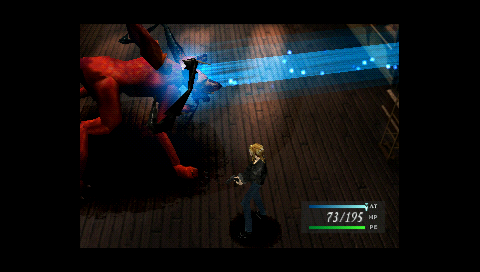 Boss battles are, of course, the most tense part about Parasite Eve’s gameplay. Bosses usually can take a lot of hits, and will test your endurance. Usually, there’s a pattern to their moves that is quickly learned, but alas, unlike Devil May Cry’s Dante (Ertyu’s favourite male character

), Aya doesn’t have a dodge move or something like that. You have to rely on moving early enough out of attacks’ way. And some attacks are simply unavoidable – one of the bosses relatively late in the game is only beatable if you have stocked up well on healing items. 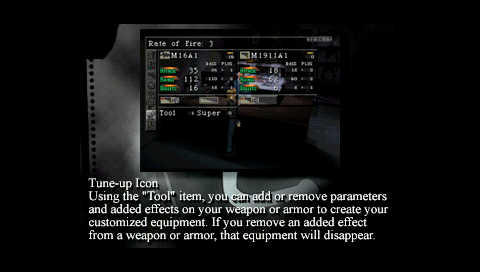 The best part about Parasite Eve’s gameplay is that you can modify your weapons, taking one weapon’s abilities or stat upgrades and transferring them onto the other, usually at the expense of the first weapon being lost. An item called “Tool” lets you do this, and there are lots of them around. “Super Tools” also exist, but they are scarce. By using them, you don’t sacrifice the weapon you’re taking the stats from. Speaking of items, you cannot buy them in this game. There are no money in Parasite Eve. You rely completely on what you find in chests. That’s rather weird, but, as the game progresses, you’ll see you don’t really need shops – there are enough items lying around for you to take and use, and enemies drop useful stuff, too. 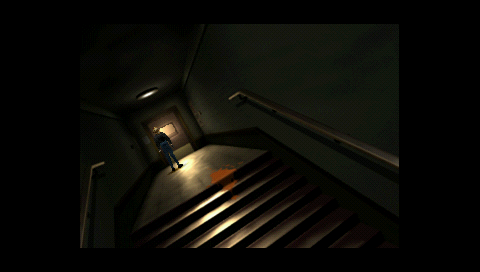 Aside from this, the rest of the game is a typical RPG – there are several locations in Manhattan you can go to, and they are basically dungeons you’ll need to navigate, fighting enemies occasionally. Parasite Eve’s random battles aren’t quite random – there are only certain spots where enemies “trap” you, and if you don’t walk into these spots, you won’t get attacked, but sometimes they can’t be avoided. You don’t actually see the enemies until you get attacked. Movement around Manhattan itself is done by selecting the location you want to go to on a cool (by 1998 standards, at least) 3D map. 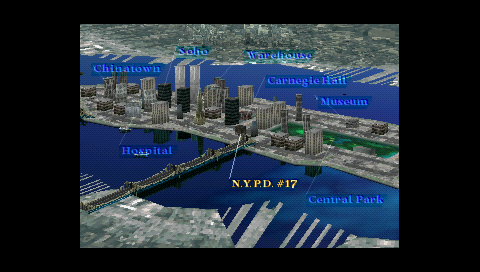 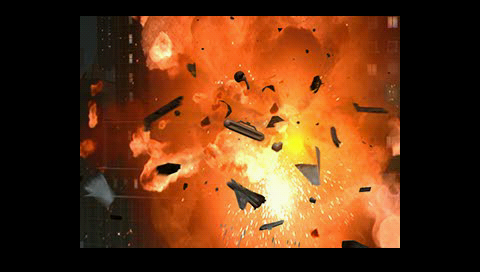 One of the high points about Parasite Eve is actually the quality of the CGI cutscenes… They look rather basic today, especially the (lack of) detail on characters’ faces, but they must’ve been quite something in 1998. I must say they are still quite pretty, especially the special effects, particularly fire and explosions. Aside from that, the game’s graphics correspond completely to the time period… Rather blocky 3D character models, monsters that are supposed to be scary, but fail to be because of lack of detail, the usual… 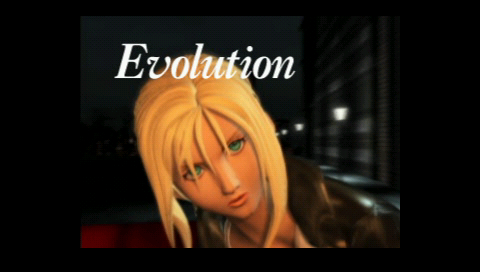 The soundtrack is mostly pleasant, with several memorable songs, but it’s a bit of a shame that the intro eventually turns out to be the best music in the whole game. I’ve featured that one in Video Game Music of the Week in the past, so this time I’ll give you another rad theme which plays when you explore the NYPD. It’s called “Out of Phase”.

Parasite Eve is a very strange ride. On the one hand, it’s fun with its battle system and the ability to decimate everything using just your basic weapon (in this case, guns) – something rare in the genre abundant with magic, summons and other special attacks… On the other, the awkwardness of the story and the flatness of the characters really detract from the experience. The best that can be said about all the characters in this game is that Aya is beautiful. That’s sadly it. Admittedly, the out-of-place Japanese scientist is entertaining, but not for the intended reasons.

All in all, Parasite Eve is an interesting experiment, but not really something you can’t afford to miss.