I’d always known that Final Fantasy X-2 was far from a jewel in Square’s crown, but I really liked Final Fantasy X and Yuna, so I thought “why not.” I’d also heard a job system was utilised, and in switching jobs the girls also switched flashy outfits, so that was bound to be fun. And, even though I didn’t get to use all the jobs available, I have to say I was pleasantly surprised with the battle system and everything around it. Featuring an ATB system where the bar would take longer or shorter to fill based on the skill used, it was a huge improvement over the plain turn-based system of Final Fantasy X. But sadly the costumes and the battle system were the game’s only real highlights. As outlined in my playthrough thread on the forum, the rest didn’t really deliver. 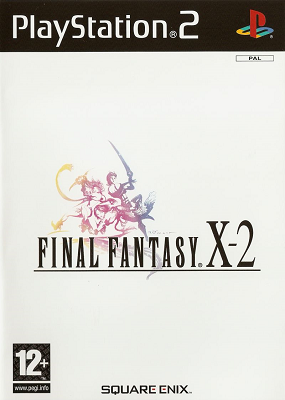 LITTLE MORE THAN A SIDE STORY 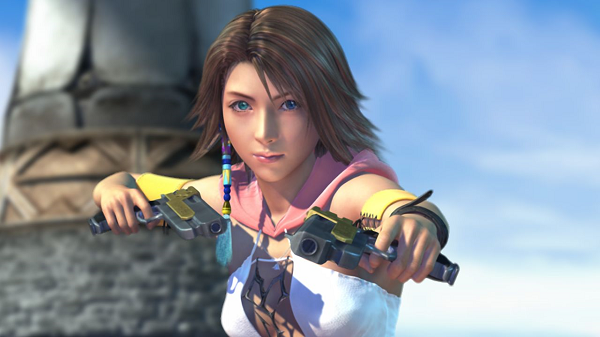 I never expected Final Fantasy X-2 to have a story even close to the calibre of its predecessor, but what I got was just a side story sold as a full game… I was not amused. I suppose Charlie’s Angels was an inspiration, seeing as we have three strong girls kicking some ass. But even the biggest quests on their path pale in comparison to even secondary things in Final Fantasy X like thwarting Seymour’s ambitions. After some fooling around, fighting rivals, and collecting dresspheres (the objects that represents the jobs in the game), the main quest becomes clear around the middle of the game, and let’s just say the threat is just such a laugh in comparison to Sin and his thousand-year reign. 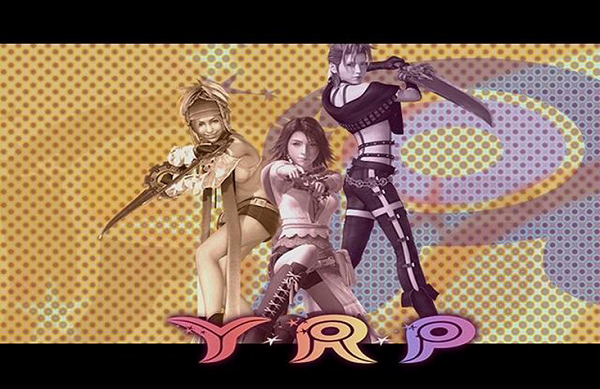 In essence, Yuna and the girls are running around an already freed and safe Spira, where the biggest problems are different factions fighting between each other. Of course, Yuna is worshipped everywhere and they listen to her, so you’ll be well in your power to smoothen the tensions. It’s almost like an extended, interactive ending to Final Fantasy X. I suppose that’s kinda cool, and I can see they intended to make a game about girls having some fun (while attaching a beautiful battle system to it). But to me, it wasn’t a great time investment. 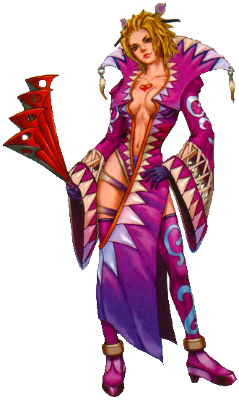 Even the characters aren’t engaging. Aside from Yuna, who undergoes a cool and actually believable change into a more carefree girl now that Sin is defeated, everyone else is rather boring. The important FFX characters that appear are shells of their FFX selves (Rikku is actually expanded upon, but she’s not that great in the first place). There are many unimportant FFX NPCs whose personalities are shown in more depth, but don’t expect much. The new additions are all mediocre or worse, including the third girl in Yuna and Rikku’s party, Paine. I suppose Leblanc, Yuna’s rival in the game, is rather amusing, but also annoying on many occasions… I liked her fat sidekick better. Oh well, at least her design is relatively sexy. 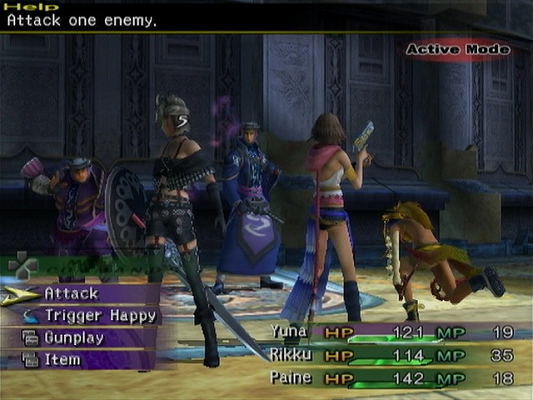 Yes, the battle system… If FFX had this game’s battle system, it would’ve been even better. Gone are the tedious sphere grids and the necessity to spend hours in the menu, carefully crafting your character’s abilities. Now, we have jobs, the system that contributed so much to making Final Fantasy V and Tactics the great games they are. Gone are the dumb turn-based battles, enter a new and improved ATB. I was very impressed with how the ATB was handled here. Only basic commands like “Attack” execute instantly, special abilities need charging time which is different depending on the ability. Of course, there is no perfect balance, some rather crap abilities take a long time to charge, while others are much better without so much waiting time. Some jobs are much better than others. But an amazing balance was never a requirement. What matters is that fighting in this game is fun. 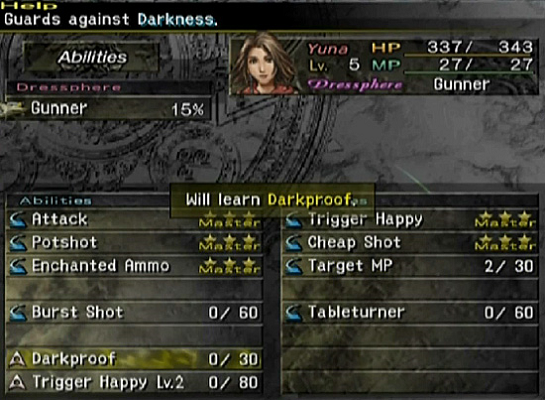 As you keep using a certain dressphere, you get ability points and learn new abilities. You can choose which ability to learn next from the menu, and some only unlock after you’ve learned the required others. I was using black magic a lot early in the game, but later on it didn’t work that well, and I switched to using mainly Yuna’s special dressphere… Special dresspheres are overpowered, but fun. They grant you high HP and stats, and cost nothing to use except that only that character gets the experience after the battle. Yuna’s dressphere is particularly powerful, as it makes you immune to status effects which strong enemies in this game just love to abuse. In the endgame, if you don’t want to grind much, Yuna’s dressphere is the way to go and beat the game. 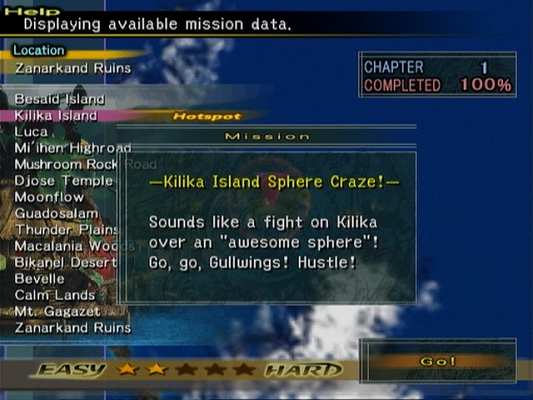 You navigate the map in the same way you do once you get the airship in FFX – you choose from a list of places – all areas familiar from the previous game – to land. There are plenty of side things to do, that’s the whole point of the game, after all. There are mini-games, which are sadly not nearly as good as FFX’s Blitzball… While gone initially, later in the game, Blitzball appears again, but sadly you are only a “manager” and cannot play the game directly. I really don’t know why they made this change, it turned me off immediately and I didn’t play at all despite sinking hours into Blitzball in FFX. There’s also some math mini-game with coins, but I found it boring, too. There are multiple endings, depending on whether you fulfil certain criteria. They’re just bonus scenes on top of the “regular” ending, but some of them are quite the fanservice. 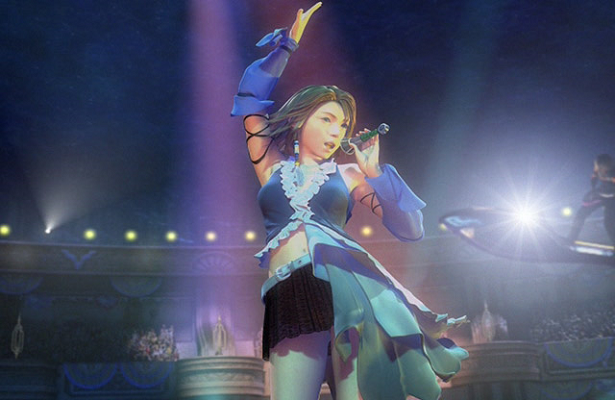 Final Fantasy X-2 is a very good-looking PlayStation 2 game. Since I’d bought the original a few years back, I didn’t bother with the “HD remake”, but the comparisons I’ve seen show that the HD improvements were minor. Yuna is very beautiful, especially in FMVs, where she looks more Japanese than her in-game model. Her Songstress outfit (highlighted in the intro) is quite the treat, but she also has other excellent job outfits like Warrior and Thief. Her default, Gunner outfit also isn’t half-bad, shame the job itself is trash (or I failed to understand how to use it to its potential). As I already said, Leblanc’s outfit is neat, too. The rest of the game looks mostly like FFX, the environments being familiar and all. That is to say, it’s pretty. FMVs are gorgeous, a real treat to the eye if not particularly thought-provoking. One hilarious thing about the graphical design is the airship… It was obviously created by a huge Harley-Davidson fan. To say it looks weird for an airship would be an understatement. 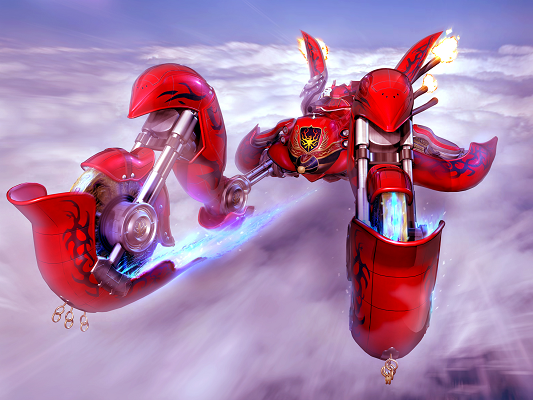 The music of Final Fantasy X-2 is not in any way outstanding. There were some nice themes here and there, but nothing that would completely take your attention over like the best ones in the previous game. Interestingly, the best theme in the game is right there on the title screen… It’s the one I chose for this review – “Eternity: Memory of Lightwaves”. As for the voice acting, I like Yuna’s English voice actress a lot, and she does a great job here, too, even if she was not quite on the level of her performance in FFX. Her soft, tender voice really fits Yuna.

FLASH AND NO SUBSTANCE

As a whole, I have to admit I enjoyed Final Fantasy X-2. Having written this review and noticing how often I mention her, I suppose this is mostly due to Yuna’s role in the game. And of course, the battle system. Still, I can’t overlook everything the game was lacking… Which is more or less everything else. Sometimes, it felt like I was wasting my time playing it. There are really many things, many silly little details, side quests and mini-games you could sink time into, but no solid story to tie everything together. It was like a little sandbox for the girls to play in, while defeating what, after Sin, could only be considered a minor threat to Spira on the side. I suppose it’s worth playing as an extended ending to Final Fantasy X, but it really doesn’t stand on its own legs very well.