Birds of Prey is a flight simulation game released in 1991 for the Commodore Amiga and PC. It was developed by Argonaut Software and published by Electronic Arts. It is my favourite Commodore Amiga flight-sim, and one of the few original games I actually owned.

When you load up the first disk you are treated to what was (back in 1991) one of the best intro movies on the Amiga. I showed this to my friends many times to try to impress them. The intro shows a dogfight between 4 modern fighters and used to remind me of Top Gun.

The entire first disk is taken up with just the intro and the actual game is just on the second disk, which means no disk swapping.

The game takes place on just one fictional map, although you can change the scenery from green fields to desert or arctic. The map is quite empty with not a great deal of targets or scenery to look at, each side has 3 airfields with radar, air control towers, runways, hangers and aircraft shelters. They also have an aircraft carrier each plus factory sites, cities, SAM sites, ships, oil rigs and tanks. But trust me, what this game lacks in graphics it makes up for in gameplay. 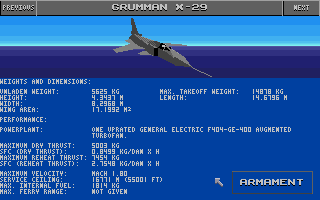 The VTOL aircraft can be difficult to master and landing on aircraft carriers is also quite tough at first, although the game can help you out.

The level of difficulty can be adjusted with four levels ranging from beginner to expert. There is also an option of “easy flight” to aid beginners further and another option to fly with wingmen who will help you.

There is a large variety of missions to choose from, such as: 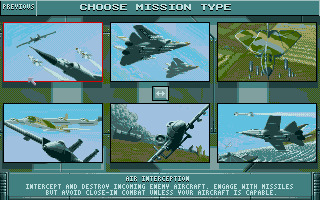 You will need to choose the right aircraft for the job, and even though flying a Jumbo Jet against Mig-29’s is fun, you WILL die.

The real plus in this game is that it’s in real time, there is an actual war going on with planes on both sides carrying out missions and not just based on you, this sets the game apart from the rest and adds a strategy element to the game. On the way to your target, you may well come across an enemy bomber on its way to bomb one of your bases. 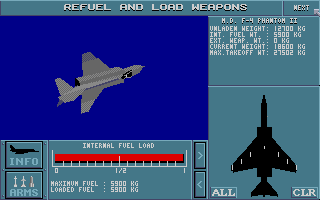 You can land to refuel and re-arm, and then take off again to finish the job if you missed a target. It’s totally up to the player where they go and what targets they hit. Of course, the enemy will be attacking you, too, so it’s wise to sometimes take them out before going to sink their carrier. If you get bored easily flying to targets, it’s not a problem. The game has an autopilot, you just set the destination and it will fast forward you in time to your destination. The game also lets you rendezvous with tankers to refuel in mid-air, so you can reach those far away targets.

There is only one cockpit view for all 40 aircraft and it’s very basic, but, if you can look past this and see the gameplay, you won’t be disappointed.

The game now appears on various abandonware sites for free download, I recommend giving it a try. I prefer the Commodore Amiga version which is free and legal to download if you purchase Amiga Forever here: http://www.amigaforever.com.

Graphics 6/10
Although excellent at the time, they no longer look good enough when compared to modern flight simulators. Everything is clear enough though, and it doesn’t harm the game in any way.

Sound 5/10
The weakest part of the game. The sounds aren’t particularly bad, but aren’t great, either.

Playability 10/10
This is where the game comes into its own. A full, real-time war is going on and you have full control over where you go and what you do, and so do the enemy.