From the Depths is a new PC game by indie development studio Brilliant Skies. It has recently released on Steam Early Access. Here’s its Steam store-page, where you can find videos, images and user reviews: http://store.steampowered.com/app/268650/.

Disclosure: A review copy of From the Depths was provided to Between Life and Games by the developer. 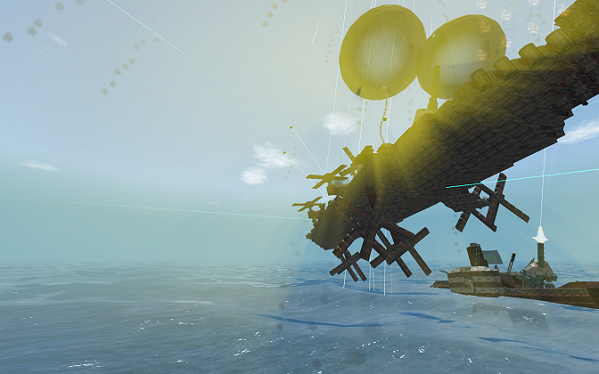 From the Depths is a physics-driven warfare game where you design and build your own vehicles block by block. You can build and take first-person command of galleons, planes, submarines, hot air balloons, helicopters and space ships in a bid to win the spoils of war, destroying enemy fleets and enormous monsters. Players man the weapons, repair damage and repel boarders while delivering broadsides and bombing runs in many single player and soon multiplayer game modes. 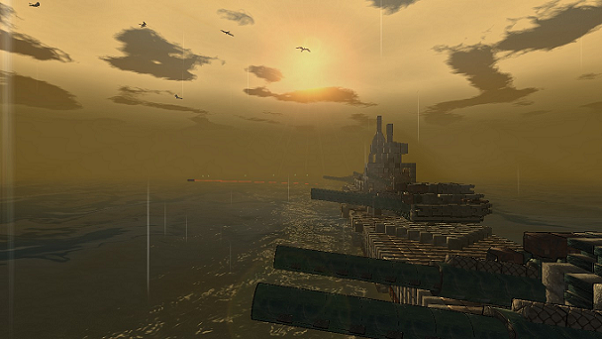 From the Depths is a really ambitious game of remarkable scale – something you see extremely rarely on the indie scene. It is a sandbox game – a genre I’ve never been a fan of. Nevertheless, in the time I spent with it, it managed to impress me. Its one big problem is the steep learning curve – I wouldn’t even call it a curve, it’s really a wall you need to first climb before you can really start playing the game. There is an over-an-hour-long YouTube video that teaches newbies the basics. But once you get past this wall, the game’s wonderful world of opportunities is available for you to explore at your leisure.

In essence, From the Depths is a vehicle-building sandbox. You can design ships, aircraft, and even spaceships! Then, once they are done, you can sail/fly them around. But that is not all – you can also equip them with various kinds of weapons, and pit them against AI-controlled opponents or even against one another. 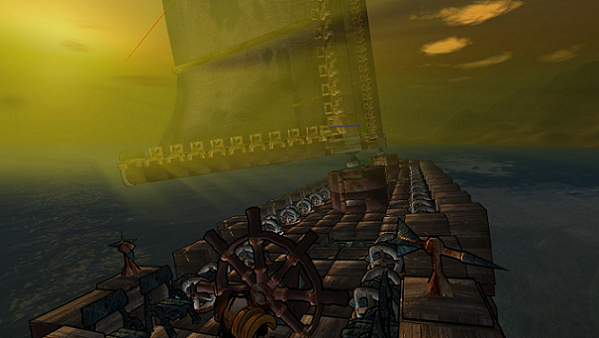 As you launch the game and select the “Vehicle Designer” mode, which is the recommended mode for beginners, you will find your avatar, a robot-like creature, on a small wooden platform in the middle of the ocean. Pressing “B” will take you to the build mode, where you will construct your boat or other vehicle. Vehicles in From the Depths are made of blocks, many blocks. And there are countless materials and parts you can add to your vehicle – aside from construction ones like wood, glass, metal blocks, there are handy items like boat propellers, rudders, jet engine, ship wheels, and, of course, weapons like rams, cannons, missiles and even lasers! You can even build AI for your vehicle with various AI parts.

It took me a while before I could build my first moving boat – I watched the tutorial video, and then played around for over an hour. But when I did finally manage to finish it, and then had the pleasure of piloting it around the ocean, it was a nice feeling of accomplishment.

Of course, it was far from the optimal for sailing, much less for battle, but one has to start somewhere. 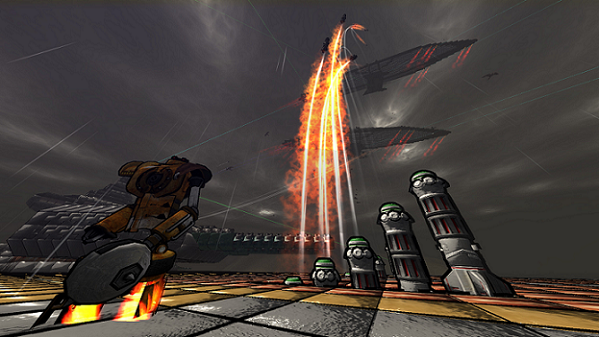 From the Depths looks relatively pretty – it seems to use cel shading like in Borderlands, which gives objects a sharper look. Explosions and the like can affect the frame rate. Controls are a bit hard to get used to, it really shows that the game is still in alpha development stage. In build mode, you need to realise that the position of the camera is really important – for example, if you’re looking at your vehicle from behind, placing the up arrow will move your block cursor forward; however, if you’re looking at it from above, pressing up will move your cursor lower/deeper on the Z axis. And in action mode, your robot moves unexpectedly fast, and jumps quite high. It takes a while to get used to it. Pressing Tab allows you to have your camera roam freely around the game world, as opposed to being locked to your character.

There are also the mission and campaign modes. Mission mode allows you to undertake preset tasks, fighting against enemy forces. The campaign is interesting – you are put in the corner of a huge map, and you need to conquer the whole map fighting with your vehicles against other factions. Yes, there are also factions in this game, each possessing various war-ready vehicles. It must also be noted that you can upgrade your character, improving various abilities like gunnery, engineering and leadership, as well as unlock various weapons.

From the Depths is an ambitious project, and one that will rely on its community to grow further. If you are a fan of the sandbox genre, and especially if you fancy building vehicles, you are bound to like it. The game offers a lot of tools at your disposal, you just need to make use of them. You need to keep two things in mind – it takes a couple of hours to learn before you can really do anything meaningful, and the game is still in Alpha, so it still has some issues and ironing out to be done.