AdventurOS is an upcoming indie game by Evelend Games. A quite unique idea, it is a fantasy-themed 2.5D metroidvania with a world that is entirely auto-generated based on the files and folders on your computer. Rooms, paths, items, NPCs and enemies, pretty much the entire content of the game will be determined by the way your file system is organised. In essence, that means that the game will be different on every single computer it is run on, and even different on the same computer over time, opening limitless possibilities.

Evelend Games is a small development team currently consisting of three members – brothers André Marí (working on game design, sprite work, music) and Emilio Marí (programmer) Coppola, and Lorena Casanova (programmer and proofreader). They already have several games under their belt, the most famous ones being Pixelry, which puts you in the shoes of a medieval knight, and Super Tower Rush, where you race a friend to the bottom of a huge tower.

AdventurOS is their most ambitious project to date, and they’re seeking funding for it on Indiegogo, having already made it almost halfway to their $10,000 goal with 23 days to go. Between Life and Games’ Vlado did an interview with the team asking them about their latest project and more. 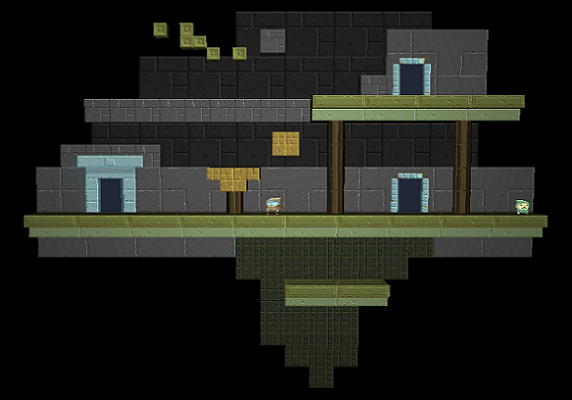 Vlado: In AdventurOS, levels are made out of folders and files on your computer. How did you come up with such an original concept?
Lorena: The idea came when Emilio was working on his open-source project, “Stellar”. He had to learn how to manage files and folders in a  cross-platform way, and, after working on that for a while, he suddenly  started thinking that the mechanics of it would be very interesting for a  game. So, after a few concepts, we came up with the metroidvania (-ish, if that makes everyone happier) idea. We found it to be the perfect balance between fun gameplay and exploration.

Vlado: If monsters in AdventurOS are made out of your files, does that mean that killing the monsters will delete your files?

André: Not at all! To be honest, we thought about that, and including some kind of option for making it possible, but we discarded it. We don’t want any kind of trouble, hahaha.

Vlado: The Indiegogo description also mentions bosses – are they  also generated based on your files and folders? What about the puzzles?
André: Bosses will be created depending on file sizes and the amount of files of one type. We think we will include only a few “scripted” bosses which are related with the main plot of the game. But they will also be created in special folders depending on your directory order, etc…. 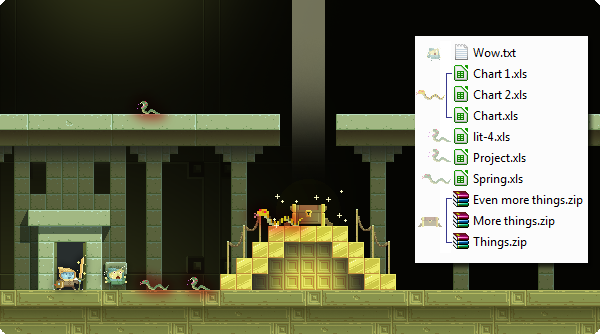 Vlado: You have completed several projects prior to this one, can you tell us  about those games? Which one was your favourite to work on, and why?
Lorena: The other games I have worked on are completely different from AdventurOS, and it’s hard to say which one is my favorite. Antipodes was my first release, so I feel very emotionally attached to it, and Super Tower Rush was my first collaboration, and it had amazing results and gave me a lot of experience.

Vlado: What are your thoughts on today’s game industry?
Lorena: The media keeps focusing on mainstream video games and developers. Even though I brush my hair with a fork, mainstream games’ success wouldn’t seem negative to me if they were creative and complex art pieces, but, needless to say, that’s absolutely not the case.

Vlado: Who is your favourite game developer? Are there any indie developers out there that are an inspiration to you?
André: Talking about indie devs, we must mention Daisuke Amaya for his wonderful Cave Story, which is one of the most inspiring games I’ve played these last few years in terms of gameplay, design and fun. Also, I want to mention Phil Fish’s art style that, because of its simplicity and beauty, was the first artistic inspiration for the AdventurOS project. Now we are focusing on developing our own style, but we have to admit that we had a lot of inspiration from Fez for the first concept arts.

Vlado: What is your goal for the future? Are you determined to pursue a career  in the game industry no matter what, or do you have other, “safer” options in case things don’t work out so well?
Emilio: All we can say for now is that we love developing games, other than that, we can only give a “we will see” as an answer. Everything will be just fine!

Vlado: What would you like to say to other indie developers who are just getting started, or would like to try creating indie games?
Lorena: Programming is an amazing experience, I would recommend for everyone to try it. Not only with video games, but also with other kinds of software. Programming will help you in many different aspects that you might not know yet, and you can also help many others with your software contributions!

Vlado: Thank you very much for your time and best of luck with AdventurOS!
André, Emilio and Lorena: Thanks to you, too! We wish you all the best!