SEGA like to release their old stuff on PSN/XBLA/Steam lately, making some completely free money off their past work. I was a big fan of SEGA back in the 16-bit era, and, of course, the 2D Sonic games were a major reason for that. Sonic was WAY cooler than Mario in the 2D world, he carried SEGA forward, and that is why the Mega Drive/Genesis was such a success. I never owned a Saturn or a Dreamcast, though, so I had missed on Sonic’s later forays, this time in the 3D world. And while his more recent games have been widely hated (Sonic Generations being a recent exception), the Dreamcast entries Sonic Adventure and Sonic Adventure 2 have always been beloved by the fanbase. Thus, quite curious to see just how good the first 3D Sonics could be in comparison to less popular stuff like Unleashed, which I’d tried a couple of years ago, I recently downloaded the demo of Sonic Adventure 2 on PSN.

The demo only lets you play the first level, City Escape. And, if I must judge by the demo (and SEGA apparently expect me to, what with not offering anything more to sample) I must say that the game has aged quite badly. Watching the level on YouTube, played by an adequate, experienced player, will surely give you a different impression, but a first time player (but pretty big 2D Sonic fan) like me was often frustrated with the transition to 3D. The most irritating were, of course, the bottomless pits you can easily run into due to the camera issues. Sonic’s speed is just not always adequately matched by the camera. The length of your jumps is also not anywhere as obvious and intuitive to control as in the 2D games, leading to facepalm-worthy deaths. 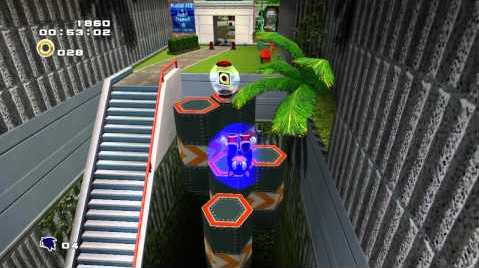 The music is another thing, I’m not a fan of the silly vocal tracks they went for, old-school Sonic music is infinitely better and much more fitting. All in all, based on the demo, my impression was that the game is not worth playing today at all. Compared to the Unleashed demo I’d played a while ago, Sonic Adventure 2 felt much more jaggy around the edges – although, while more polished overall, Unleashed had some of the same issues, despite being quite a few years younger – which isn’t speaking too well of Sonic Team and their struggles to adapt to the 3D era. By what I’ve heard, Sonic Adventure 2’s story is hilariously dramatic, and it does introduce a cool character in Shadow, so maybe that could draw people, but, from the perspective of someone with a limited gaming time and some experience with much better made 3D platformers, I have to say it’s not worth your time or money.