I LOVED Katamari Damacy, so, after beating it, I quickly moved on to the second game in the series. I vaguely remembered it featuring co-op mode… And the European boxart does feature The Prince and a cousin pushing the katamari together! To be able to actually play through the whole game in co-op was total glee. I played through it with my wife, and although we had a bunch of difficult moments and had to redo some stages plenty of times, at the end we managed to beat the game. It was amazing, as I hadn’t beaten a long game together with her since 2011, when we beat Lara Croft and the Guardian of Light. Playing as a team with a person you love is wonderful. 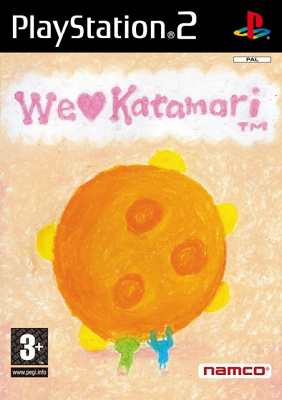 In many ways, We Love Katamari is even more fun than the original. Co-op is of course one of them, but there are also the multiple gameplay variations added here. For one, there are now stages underwater, on a racing track where the katamari is super fast, in a snow resort… There are also various goals – usually, you have to make the katamari a certain size within the time limit, just like in the first game, and the “get the biggest X” kind of stages are also here. But sometimes you just get a size limit and must get the katamari to that size as fast as possible, sometimes you have to collect a lot of a certain object, and there’s even a stage where you need to keep a katamari burning (by collecting objects constantly, of course), and light a campfire with it!

THE KING, THE PRINCE, AND PLENTY OF COUSINS 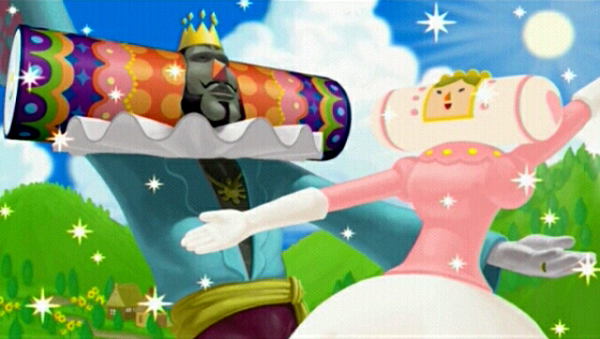 …and The Queen, actually! The Queen briefly appeared in the Katamari Damacy cinematics, but here, she plays a more prominent role (still mainly in cinematics, though – The King is still the one giving you your tasks). The story in We Love Katamari trumps its predecessor, because it’s centred around none other than everybody’s favourite, The King of All Cosmos! The cinematics which are unlocked as you pass through stages reveal moments from The King’s past – yes, even from the time he was as tiny as The Prince is now! As for the premise of the game that calls The King and The Prince into action again… It’s the fans! That’s why the game is called that way – because people loved Katamari Damacy so much, they wanted more. And thus, we have the “Select Meadow” with various fans from Earth popping up regularly and asking The Prince to do them some kind of a favour – a katamari-related favour, of course. 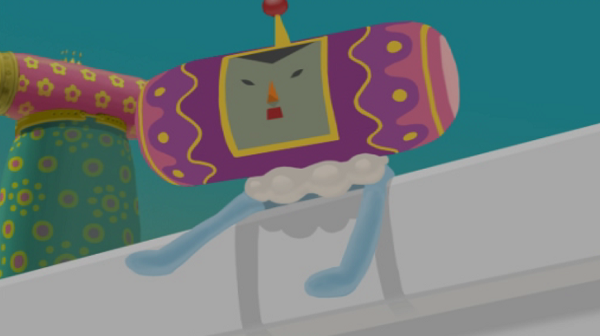 The King now treats The Prince with more respect – a well deserved upgrade for the tiny guy after he worked his ass off to put those stars back into the Cosmos in the first game. No longer will you get verbally abused by The King… Or at least not nearly as often, and mostly when you fail a stage. Also, The King is addicted to flattery – a single flattering sentence will completely make him change his mind about things, and send The Prince on a different errand than originally planned. It is, of course, one of the things that make The King so likable. 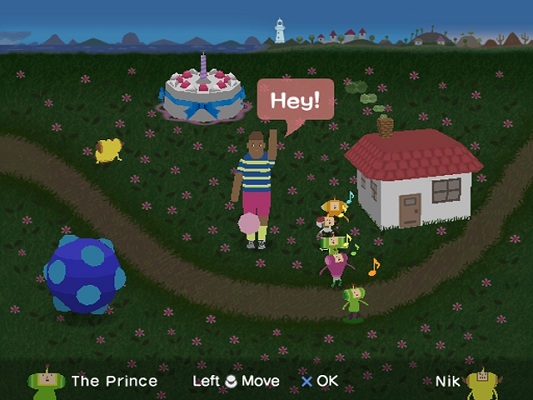 Cousins also already existed in the first game, but not co-op… You could just play VS mode with them. And here, once you roll up one cousin in a stage, you are ready to play the rest of the game in co-op mode with a partner! Or you can simply play through the game as your favourite cousin, instead of The Prince. In the “Select Meadow”, you can switch places with a cousin simply by approaching them as pressing a button. The most lovable part of the game’s story is the clear message you get from The King if you beat it and manage to see the true ending.

WHAT WE KNOW AND LOVE, PLUS MORE 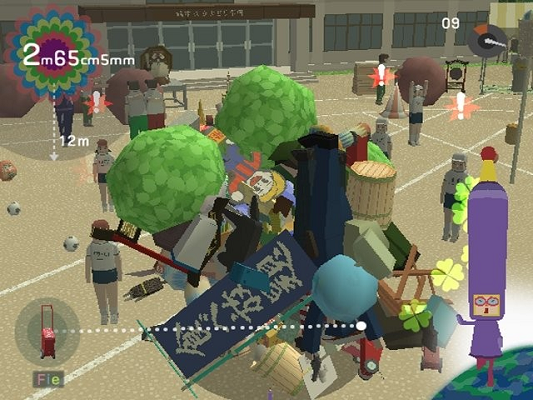 We Love Katamari, much like the first game, has you playing as The Prince (or a cousin of your choice), rolling a katamari and getting as many objects as possible until you meet the requirements set in the stage (usually getting the katamari to a certain size), or the time runs out and you fail… (And there are also other ways to fail… I’m looking at you, campfire stage!) Controls haven’t changed, once again you are using both analog sticks to move around, clicking on them to jump on the other side of the katamari, and pressing them quickly in an up-down motion (with alternating directions between the left and the right one) to make a katamari-dash. Again, the things you can roll up depend on the katamari’s size, and you must watch out for bumping into bigger stuff because it occasionally causes objects you’ve previously rolled up to fall off, and your katamari gets smaller. 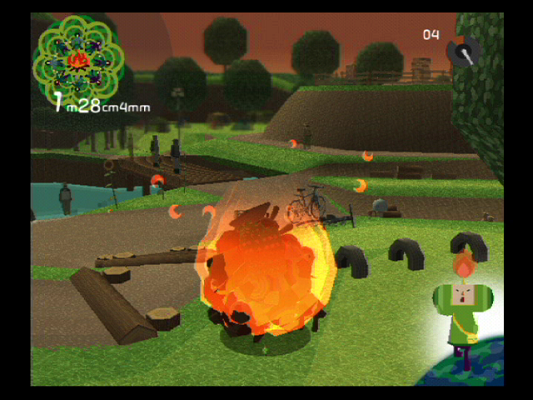 Before starting a stage, you must approach a fan in the Select Meadow, and listen to their request. Other options in this place that obviously replaces The Prince’s Home Planet from Katamari Damacy include saving the game, browsing the different items you’ve collected, etc. Occasionally, stages have even crazier requirements than in the first game – I remember rolling a katamari of a kilometre and a half once, while my record in Katamari Damacy was about 500m. Generally, with one big exception – the campfire stage, I’d say We Love Katamari is easier. But well, it’s a game about fan service, in all meanings of the word, so perhaps this is normal. 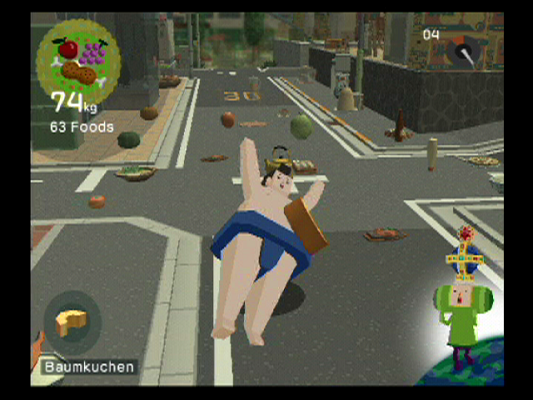 The bottom right of your screen once again shows the most recent thing you’ve collected, and they’ve naturally added even more stuff than in the first game. Also, stages are much more thematic, and sometimes the goal makes a lot of sense – for example, there’s a stage where you must grow a weak sumo wrestler much bigger so you can help him defeat his opponent, and there’s another where you must collect lots of origami cranes to take to another child’s sick friend at the hospital. The most memorable stage is probably the Hänsel and Gretel-themed one. You guessed it, you gotta collect the sweets composing the witch’s house there… It’s even featured on the North American cover of the game. 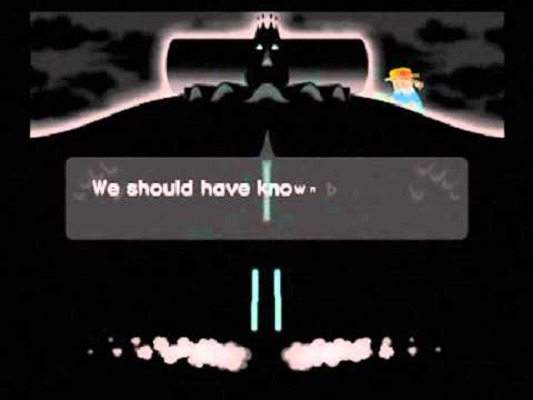 Ultimately, your katamaris become cosmic objects – stars, planets, satellites… Even though the universe isn’t in peril due to The King’s drinking habits this time, what bad could some more beautiful stars in the sky do? It’s not like the fans requesting these katamaris have much use for them. It’ll take much more than just passing the stage to earn The King and the fans’ full approval, though… Unless you make a gigantic katamari, they’ll not be very impressed. But such is The Prince’s lot. And, should you fail a stage, you will have to face The King’s wrath… in the form of powerful light beams he shoots from his eyes. Get hit by them, and you get smaller, until you are so tiny you disappear entirely… 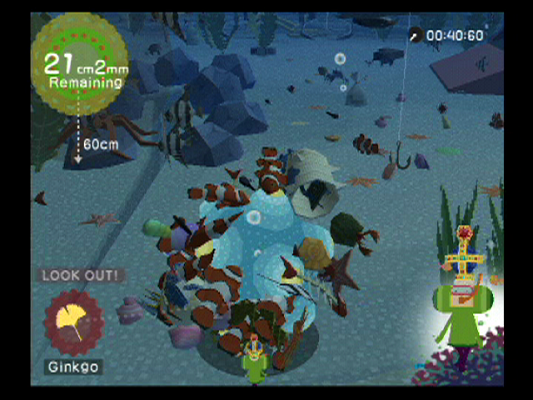 The biggest improvement over Katamari Damacy is the incredible variety of stages and environments… There are so many different ones here, as opposed to the more consistent, but rather monotonous progression in the first game. There’s a reason why you can play the fans’ requests pretty much in whatever order you want this time… They are just different, not progressively harder like the stages in the first game. The style remains mostly the same, with low polygon count for the various objects so that the PS2 hardware can cope with so many different objects on screen. It must be noted, though, that some stages are separated into “sections” here – for example, you enter through a door, and lots of new objects “load” in front of you. Doubtless this is also due to technical limitations. 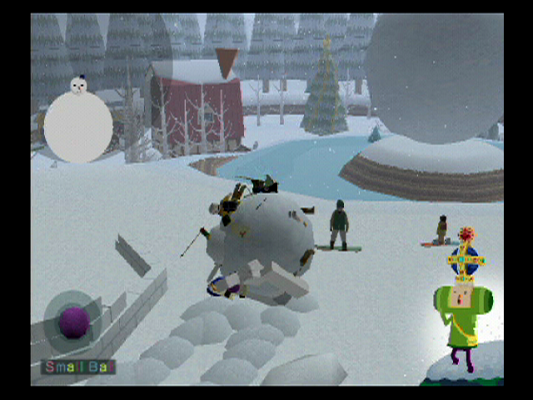 The soundtrack of We Love Katamari is probably its weakest point… While there are a few nice songs, it’s not nearly as rad as the first one, where like 2/3 of the songs were super awesome. The general Katamari theme is of course preserved, with the main song remixed, as well as plugged in here and there. And once again, the vocal songs are the best. As illustration for this review, I picked my favourite, “Tsuyogari Katamari”.

NOT AS NOVEL, BUT STILL GREAT

Katamari Damacy was certainly an all-time achievement… And We Love Katamari is just an improvement on the general concept, merely an addition of lots of different possible flavours to this magnificent mental food called Katamari… It does not feel nearly as novel as the first game, that’s for sure. But there are so many things it does better, especially if you have a partner to play co-op with, that it’s not easy for me to say which game was better. In fact, if it wasn’t for the much more amazing soundtrack (and the soundtrack is a MAJOR part of what makes Katamari Katamari), I might have even rolled with the second game! At the end, what can I say? Play Katamari Damacy first, but then play its sequel, too, because it improves on it in many ways! Both are so worth it.