Our princess Klemoib is the only truly regular girl on the Between Life and Games forum at the moment. One of the things she is known for is her inexplicable passion for a relatively obscure SNES RPG called Terranigma. It is mostly due to her raving about this game that I decided to give it a playthrough. And, while I don’t quite share her extreme love for it, I’ve gotta say it was well worth it. It had been a while since I’d played an SNES RPG, and it reminded me of the magic of those days, when stories had reached a very high level, while graphics still hadn’t. But Terranigma does a great job in telling its story within the simplistic confines of sprites.

Terranigma is an action RPG, with the player taking the role of protagonist Ark in his struggle to revive the Earth. At first, Ark is just a troublemaker who’s never left his peaceful village, but, like in most RPGs, things change quite fast, and a serious journey the world depends on begins. The very personality of Ark showcases one of Terranigma’s impressive points – its ability to combine comedy with the serious messages it carries. You’ll experience this throughout the game. Add to that the many, many different and incredibly charming environments, the really fun battle system, and the interesting NPCs Ark gets to interact with, and you’ve truly got one of the classics of the 16-bit era. Not a well-known one, but a classic nonetheless.

I’ve taken all the screenshots in this review on my PSP. 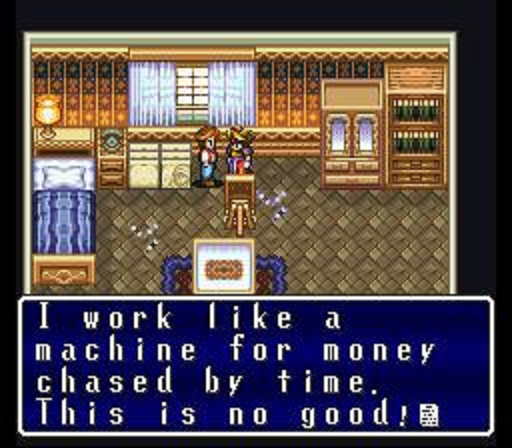 You can really tell when a game’s writers have had a vision of something grander than just telling a story that’ll only matter while you’re playing the game and be quickly forgotten afterwards. Terranigma carries a powerful message, a message of great proportions, a message about the world and our own significance within it. Terranigma stays simple throughout, without much symbolism or hard-to-follow plot threads, but it still carries a sense of mystery, the joy of discovery, and the sheer thrill of fighting and defeating mighty foes to continue forward on your journey. 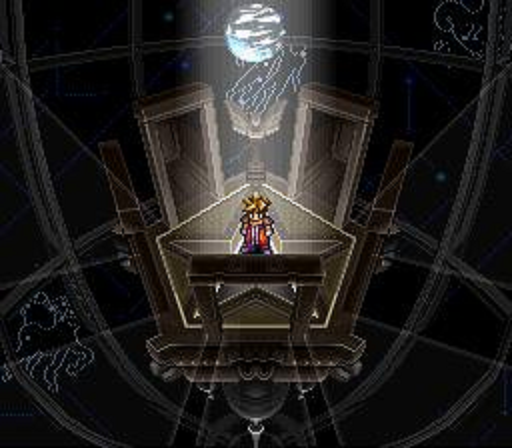 Ark’s quest to revive the Earth is exciting, you can already imagine it’s a difficult process that must be followed step by step. The most fun part is that the world Ark wants to revive is pretty close geographically (and culturally) to our own world. You’ll even encounter the Terranigma versions of some historical figures!  Some twists along the way contribute even further to the story’s overall quality, and the fantastic sense of humour of the writers, combined with some darker tones, really creates an atmosphere that will feel fresh and exciting even if you’ve played tens of other JRPGs which inevitably, in one way or another, deal with saving the world. The overall message of Terranigma is very Japanese, it’s representative of the Japanese mindset.

A MIX OF PERSONALITIES

Like with most good RPGs, one of Terranigma’s strongest points is its cast. Ark is quite far from the typical JRPG protagonist, starting off as a childish troublemaker in his home village, who only triggers the events that follow due to sheer curiosity. I felt a bit annoyed with him at first, but, as the story developed, he grew on me big time, his responses to the various situations he found himself in were quite relatable. Ark also has a companion on his journey, a strange being called Yomi who pops up every now and then with useful advice and/or to make fun of Ark’s shortcomings. The two make an adorable duo. 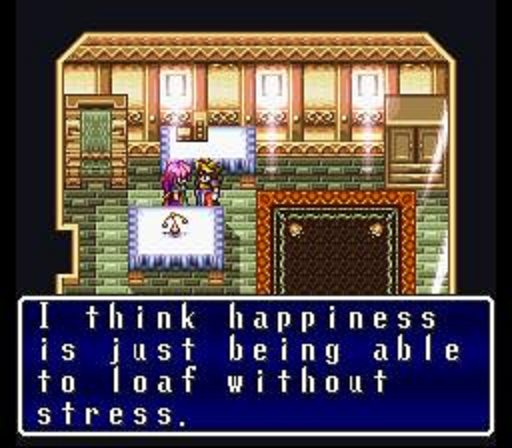 And that’s only the beginning. Ark’s sweetheart Elle is also a great character with her pure love, and the other, more intriguing Elle Ark encounters along the way, is the one that’s involved in some of the most thought-provoking moments. Add to that the young and energetic Meilin, the loyal, good-hearted Fyda, the playful Perel, the mysterious Royd, the wise Lord Kumari… The villains, Dr. Beruga in particular, are also interesting, the motives for their actions also making you ask yourself some questions instead of blindly hating them in the way most RPGs go for and easily accomplish. As usual, I can’t go into too much detail because these reviews also aim to help people who haven’t played the games yet, but the gist is that the Terranigma characters will provide many unforgettable moments. 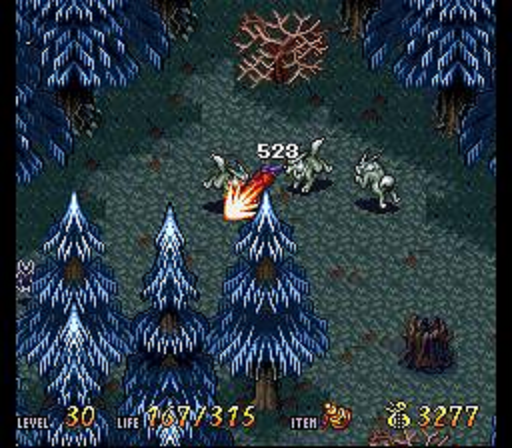 Terranigma’s gameplay is relatively typical action RPG gameplay at first sight, but I must say battles are really, really fun – much more so than in other action RPGs. Ark uses a spear for both attack and defence – you attack with A and, using the right shoulder button, you use the spear as a shield to block some projectile attacks (though not all). It’s the various attacks that make the gameplay so great – aside from the normal strike, you can do a rapid attack by mashing A, you can jump and press A to do a spinning attack (effective against flying enemies), you can tap a direction (or press Y) to run and then press A for a sliding forward attack (effective against fast enemies) or you can run, jump and then press A for a downward diagonal attack that’s the most fun and strong against ground enemies. 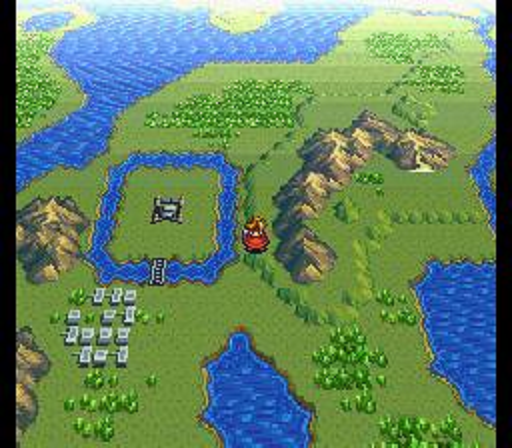 Those are basically the moves you will be using on your playthrough. In dungeons, at least. Other than that, it’s typical RPG fare. Terranigma’s story consists of several chapters. There’s an overworld without any random battles – you’re free to roam around for as long as you want, until you get to your desired location. Once you enter a town, you walk around and talk to the citizens, acquiring invaluable hints on what to do later. NPC interaction does not quite match classics like Xenogears and Lunar, but there are still some humourous exchanges to be had. Exploring the world and the various towns and cultures in it is really interesting. 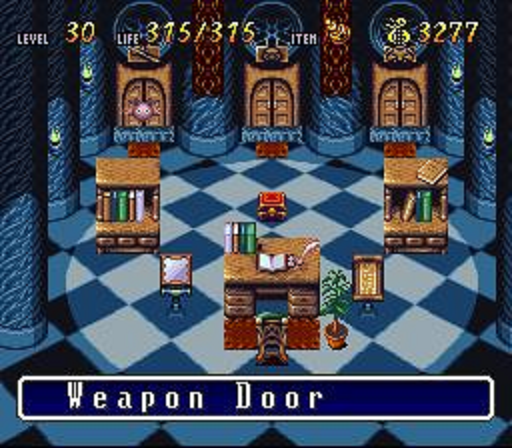 The most interesting game mechanic in Terranigma is the item/equipment management. The first time you interact with Yomi, he tells you about Pandora’s Box. It’s not a doomsday plot device this time, but merely the fascinating gimmick the developers came up with to put a nice flavour to an otherwise boring part of RPGs. Every time you press select to open the item screen, a fun animation of the box materialising and Ark entering it ensues. Then, you have several sub-screens – a general one where you can access the doors leading to your weapons, armour and items, as well as the dungeon map, the magic box, a battle handbook (description of your attacks), a journey guidebook, a strength mirror (see your level, stats, experience) and an options screen. In the weapons/armour/items screens, you can equip, use and dispose of those at will. Some items are “key items,” they’re necessary to handle certain situations. 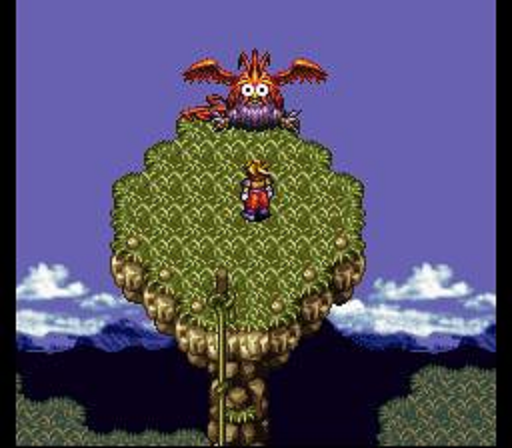 Another fun thing about Terranigma is the puzzles. They aren’t all about moving items around, they’re more general, and depending on the specific situation. The point is, you’ll find yourself wondering where to go or what to do next sometimes, believing you’ve exhausted all the possible options. Sometimes, you’ll feel the urge to consult a walkthrough, I know I did… But I successfully resisted and managed to handle it all by myself.

Just keep in mind all your items and what you talked to those NPCs about and you’ll be fine. 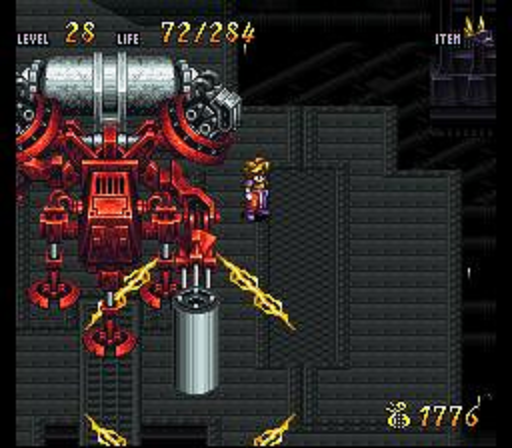 Boss battles are, of course, the most fun ones, often testing your endurance. And whether you stocked up well on healing items. Unfortunately, those play a great role on beating bosses – once you’re filled to the brim with bulbs, you can absorb a lot of damage, and the damage you do in the meantime, even if little, will eventually be enough for the victory. That’s one great shortcoming of Terranigma – the relative lack of difficulty in battles. Sadly, you cannot use magic on bosses, rendering the otherwise flashy and cool spells rather pointless, as you can beat down on normal goons with your regular attacks, anyway. The final boss is quite epic, as usual for the games of the era. Your victory will be fulfilling. 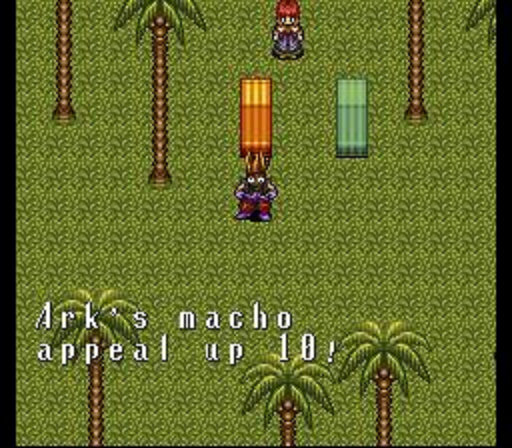 On your way, you’ll encounter new ways to traverse the world faster and reach lands you couldn’t reach before. As mentioned above, you’ll notice a lot of country/city names are similar to their real-world counterparts. Cultures are also similar – sometimes to the point of parody. There are also some very nice Easter eggs that will make you smile. The game is just quirky and Japanese in many ways – not completely off-the-wall like Earthbound, but still quite strange at some moments, including a few quite dark ones. Exploration is rewarded. 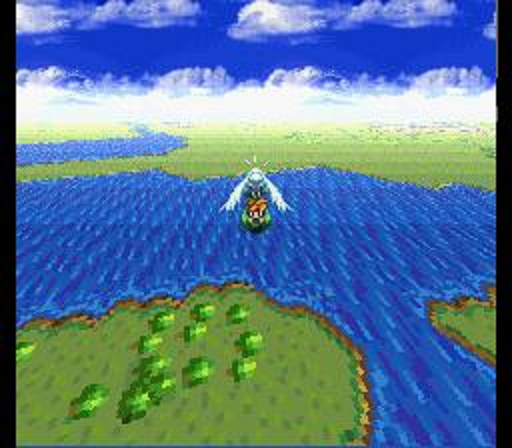 Terranigma doesn’t look too different from other RPGs of the era, with nice sprites and somewhat repetitive, but pretty environments. Something that makes it stand out is the very nice utilisation of SNES’ famous “Mode 7” pseudo-3D effect (including on the world map). The enemy designs are interesting and often hilarious. Enemies depend entirely on where you are – for instance, you’ll fight carnivorous plants in the jungle, wolves in the forest, robots in a science lab, etc. There are still occasional odd enemies that you’ll encounter in several different places or that just don’t fit their environment. Bosses are massive and look powerful – the difference in size between them and regular enemies is so much bigger in action RPGs than the turn-based ones. There are some really beautiful environments and backgrounds.

At first, the soundtrack of Terranigma, composed by Miyoko Kobayashi and Masanori Hikichi, looks relatively simple in comparison to behemoths of the SNES library like Chrono Trigger or Final Fantasy V and VI… But, as I played on, it grew on me, and I must say there are plenty of songs that I will remember from this game. There’s great variety in the soundtrack – serene themes, menacing ones, energetic tunes, sad ones… The song I will share with you is called “Evergreen” and is probably my favourite from the game.

In a way, Terranigma is a typical 16-bit action RPG… But it’s unconventional in so many other ways. The way it’ll make you think, both through its fascinating story, and simply when you are stuck and wondering what to do next, is quite untypical, as are the NPCs, the humour and the wonderful music. I highly recommend it to all fans of games of the golden era of 2D gaming – not even necessarily just RPG fans, as it’s an action RPG with heavy emphasis on the real-time battling. The similarities between our world and Terranigma’s are obviously intentional – through the fictional story of Terranigma, the writers clearly want to send a message about our own Earth and the impact we have on it… Making us ask ourselves whether life is really worth living the way we live it…