The 16-bit era was incredible, to say the least. Maybe not the best one in terms of games (though quite close), but certainly the best in terms of rivalry. SEGA vs. Nintendo, Sonic vs. Mario. It was unforgettable. Already back then, despite having played quite a bit of Mario on the NES before I got my hands on a SEGA Mega Drive, I developed a strong preference for the Sonic games, due to their faster pace, better protagonist, and more fun setting. They also just looked so much cooler.

Yet, I hadn’t beaten the original Sonic the Hedgehog until just recently. I’d first played (and beaten) the second one, and I’ve also beaten the third one (though without Sonic & Knuckles attached). My efforts with the first one back in the day ended quite miserably, I don’t think I ever made it past the Marble Zone, maybe I reached Spring Yard once or twice. But it was just too hard for me to beat on a regular console. Thank goodness we’ve got emulators and save states nowadays. 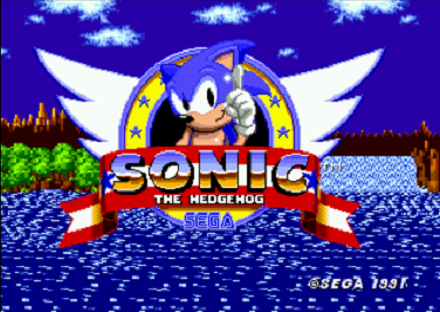 Sonic is a great start for the series. If you’ve started with Sonic 2 or 3, some things will be sorely missing (especially the spin dash – you have to roll up yourself when you have enough speed to attack on the ground, you can’t do it from a static position). However, the game has laid a solid foundation that the later entries built upon. It’s just Sonic vs. Robotnik, the whole crew of friends of Sonic only appear later in the series. In a way, that’s not bad. The difficulty is indeed quite high, as I said, but also remarkably fair. Unlike Mega Man, a decent level of knowing the stage will be sufficient, and furthermore, bosses, even the final boss, can be defeated fairly once you understand their pattern. On the other hand, Sonic doesn’t offer infinite continues – actually, you start without any.

This is another review that provides screenshots captured by me. 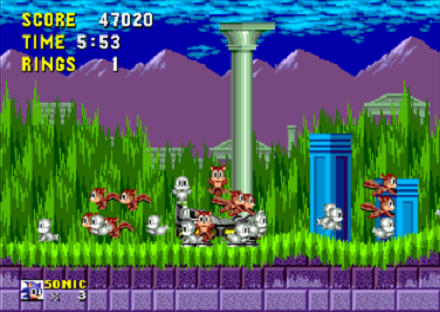 Like most platformers from those days, Sonic didn’t have much of a story. You play as the blue hedgehog and chase the evil Dr. Robotnik, who has taken the Chaos Emeralds and imprisoned the poor forest animals, trapping them in robot bodies to fight you. The ultimate goal is to defeat Dr. Robotnik and put an end to his schemes. Your weapon? Your speed. There is still some charm about all this – as a forest animal yourself, you rise up and fight the evil human scientist in order to free your friends. Simple, but enough to get a youngster interested.

Sonic the Hedgehog starts with the Green Hill Zone… Certainly a legendary one in the franchise, and I’d argue it, especially Act 1, is a masterpiece of game design. Back then, games didn’t have fancy tutorials like many of today’s games do, you had to learn how to play in the middle of the action. Thus, it was important to have a first level that’d show a beginner the ropes – easy enough for them to be generally safe, but also with enough obstacles and enemies so that you know what’s dangerous. Green Hill Act 1 does that greatly – the gameplay of speed is showcased, and there are also plenty of rings, so you can quickly regain your invincibility if you get hit. 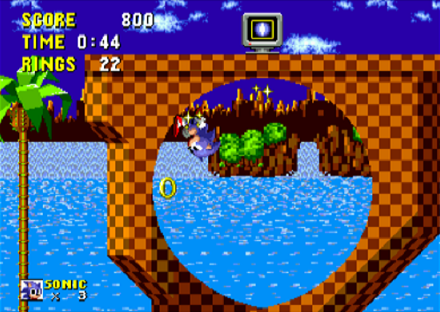 Sonic is a simple enough game – you run, you jump, you can also roll when you’ve gathered enough speed. Once you have at least one ring, you’re safe. Lose them all, though, and the next hit kills you. The rings are your shield, in a way. And there’s also a real shield power-up, letting you survive an extra hit. There’s also the immortality power-up that renders you invincible to everything but bottomless pits and drowning for a while. You destroy enemies by jumping on them, only if you’re rolled up. And there are some enemies that have spikes on their backs, which causes you to lose your rings if you try to hit them from above. As you blow up an enemy, the animal trapped inside comes out and escapes, safe and sound.

And thus, you make your way through the stage, eventually reaching the next act. Zones have three acts each, and you can unlock a bonus stage if you do well enough during the stage. The bonus stages are weird rotating mazes with hypnotic backgrounds, and your goal is to collect all the rings before reaching the exit, which nets you a Chaos Emerald. Getting all the emeralds just helps you reach the best ending, though, you can’t turn into Super Sonic like in the second game. The bonus stages are also the means of getting continues. 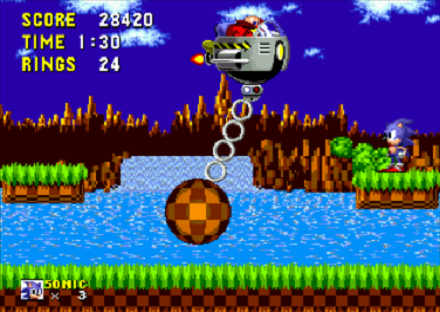 A boss battle with Robotnik awaiting at the end of the last act of each zone. The boss fights are quite distinct between one another. They are difficult, but quite manageable once you learn the pattern of Robotnik’s attacks. There is far more danger in simply not being careful enough during the stages themselves and getting yourself in a bad situation leading to a lost life. Occasionally, there are spikes or bottomless pits you really need to watch out for.

The variety of stages leaves more to be desired (Sonic 2 does much better in that respect) – there’s some lava requiring you to be extra careful, but the most drastic change from the normal gameplay that we see is the water stages. In the water, things are quite different, as Sonic isn’t as fast and is a bit more difficult to control. He also needs air to survive, so you’ll need to look for big air bubbles or head to the surface often. If you take too long since your last breath, a counter and uneasy music start, fail to find a bubble or get on the surface before it reaches zero, and it’s a lost life. In short, the water segments won’t be your favourite. 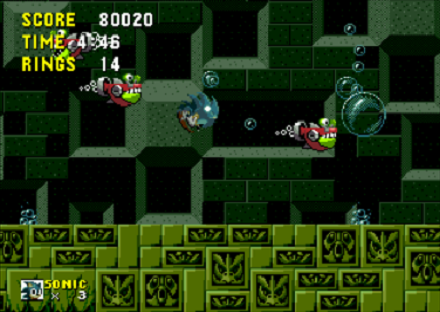 I must say the game also ends a bit abruptly, I was expecting 1-2 more zones. The final boss battle also doesn’t offer the scale and threat one would expect it to (again, Sonic 2 does way better). But still, it’s a thrilling game, especially thanks to the aforementioned gameplay of speed, and, naturally, the considerable challenge you must overcome. The satisfaction is sure to be there at the end.

COLOURFUL AND EASY ON THE EARS

Sonic is a pretty game. The use of colours certainly helps create the atmosphere, and is even more impressive considering the Mega Drive/Genesis’ rather limited palette. Green Hill Zone, with its palms and waterfalls, and Marble Zone, with its melting lava, are the most impressive in terms of looks, but the other levels aren’t bad, either. The enemy designs are very creative and fascinating, they show off Robotnik’s evil scientific genius. The villain’s exaggerated roundness certainly works well, and the brilliance of Sonic’s design, which was later imitated by tens upon tens of wannabe mascots in 2D and 3D platformers, as well as other genres, is out of the question. 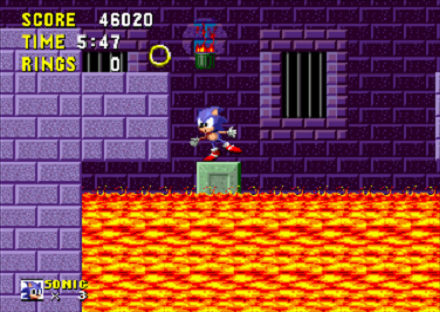 Likewise, the music is quite good, as a whole. Masato Nakamura has composed some memorable songs, and even though there are also some that will quickly be forgotten, the good ones are enough to leave an overall nice impression. Green Hill is stellar here, as well, the theme is incredibly catchy and adds to the pleasure of playing through the level. The sound effects are quite fitting and remain in the sequels. Anyway, the music I’ve chosen is Scrap Brain Zone’s theme – easily one of the best Sonic themes, period.

HISTORY IN THE MAKING

The clear intention behind Sonic the Hedgehog was to rival Nintendo’s fat plumber, and SEGA largely succeeded in achieving that goal… At least in the 16-bit era. The game became such a hit that it was soon chosen to be the one bundled with the new Mega Drive/Genesis consoles, which led to tremendous success and market domination for SEGA in Europe and the US. It wasn’t meant to last, but those were truly the glory days for SEGA, with only the early days of the Dreamcast coming remotely close. And the blue hedgehog was the one they needed to thank for that.

Sonic the Hedgehog was bound to remain a legendary game, even if it was outdone by the sequels. The new, fast-paced gameplay, Sonic’s cool design, and the Green Hill Zone’s excellence paved the way for its success. It was the birth of one of the most popular series in gaming, and a clear statement that the 2D platformer genre was yet to reach its peak, even after celebrated games like Super Mario Bros. 3 and, a few months after the first Sonic, Super Mario World, had been hailed as pretty much perfect. Today, 21 years later, Sonic the Hedgehog is still a fine game that anyone can enjoy.