Ni no Kuni was actually the last physical copy of a game I bought for myself… And it was over a year ago, at launch. The intention was to quickly play through it and be among the first to review it. As you can see over a year later… That didn’t work out. Ni no Kuni managed to grab me in its very beginning – it became clear it’d be a relatively simple, fairy tale-like story, but the animation was really beautiful, and Oliver’s motivation for embarking on his quest was quite touching. Unfortunately, not long after, once the marvel at the “Other World” (which is what “Ni no Kuni” translated means, although the literal translation is “second country”) passed, the game lost its grip on me. The rather large length didn’t help, either, and it took me about a year to actually see it through. 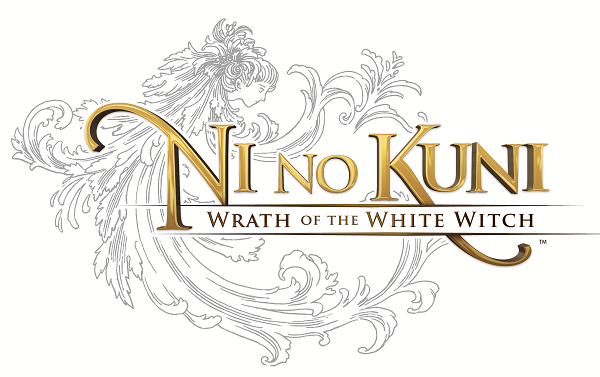 Above all, Ni no Kuni is a very beautiful game… Studio Ghibli have done masterfully, the animation is truly like one of their movies – of course, everything is more repetitive, what with this being a 60-hour game, and not a 2-hour movie, but it never really gets old. There are also plenty of varied characters in terms of design, with two of the rulers of Ni no Kuni’s kingdoms being particularly interesting. The Level 5 part of things, however, is not comparable at all. The story is just too simple with only one or two impressive moments, the battle system is nothing to write home about, and the side quests are quite repetitive. This mix doesn’t result in a fully compelling end-product, but, given the severe lack of quality JRPGs in the seventh console generation, Ni no Kuni is still something. 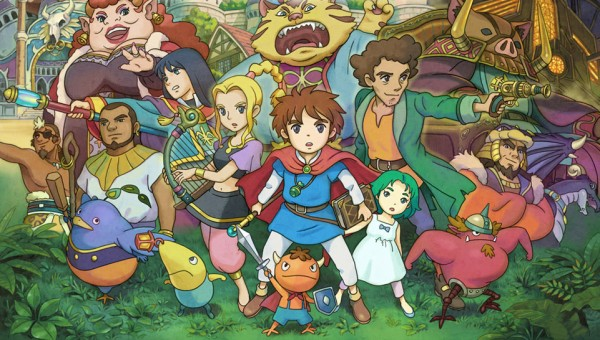 Ni no Kuni never presented itself for anything more than a beautiful, yet predictable fairy tale, and that’s what it turned out to be. The story of a young wizard saving a strange, but wonderful world from the clutches of evil. There are a couple of nice, not completely expected moments as I said before, but there are the exceptions rather than the rule. As a whole, the game relies on presentation, not depth. Still, there are strengths. There is some decent, albeit rather childish humour, and there are actually some extra tales for your reading pleasure in the Wizard’s Companion in-game book. Those are actually more fun than the story of the game itself, but I’m not sure if they should count when assessing it. 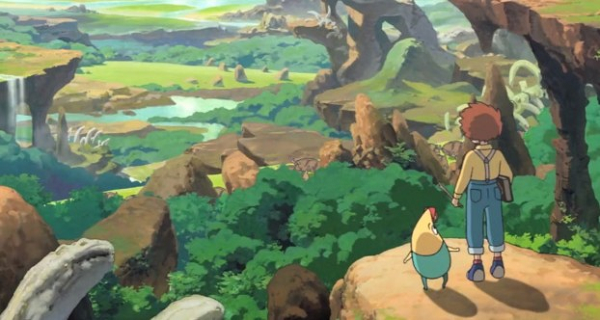 The world of Ni no Kuni is more appealing than the story. While Oliver’s home world, which appears to encompass a single small town called Motorville, is quite dull and uneventful (you can’t even rotate the camera while there!), the Other World is incredibly varied and colourful, featuring distinctly different kingdoms and other locations with all kinds of creatures in and outside of them. The little fairy island and the fairy race as a whole have to be a highlight.

CHARMING, BUT RATHER FLAT CAST 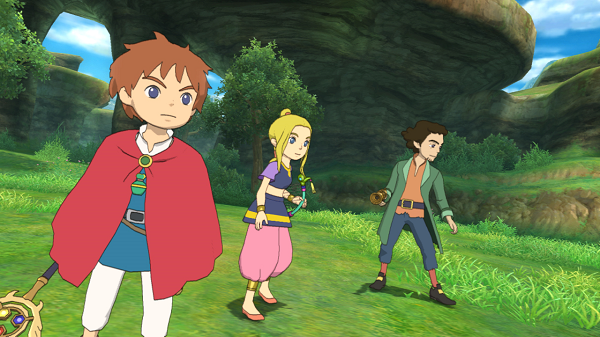 In terms of characters, Ni no Kuni is alright. The several playable characters aren’t very fascinating and aren’t developed that much, but at least they mix well. The interactions between them are quite smooth and pleasant. Oliver, the main protagonist, is a child, and acts like one. Don’t expect anything other than goody-goody behaviour from him. Drippy, the fairy, and his guide in the Other World, is the soul of the party, the main source of humour. Talking to him wherever you are can yield some entertaining lines. Later on, Oliver is joined by Esther, a kind girl determined to save her world, and Swaine, a rather shady character who later on gets some nice backstory.

There are other notable characters outside of the main party, like the three kingdoms’ rulers – Ding Dong Dell’s King Tom (a giant cat), the Cowlipha of Al Mamoon (a giant cow-like person), and Hamelin’s Marcassin, a pretty-boy wizard. King Tom is probably my favourite, he’s really hilarious. The sky pirate captain, Kublai, is one of the rare “cool”/tough guys in the game. The evil Shadar and the mysterious White Witch are not particularly interesting villains, but they work well enough in the context.

There are also plenty of less important characters, including some you meet recurringly, doing side quests to help them. One can get attached to those. Sadly, dialogue with townsfolk is generally quite dull – from games like Xenogears and Lunar, we know how powerful a tool for world-building that can be. So no points for Ni no Kuni here.

Ni no Kuni’s gameplay also shows the developers’ desire to come back to the true JRPG roots, but not at all costs. The battle system is practically an action one, however, you can pause the action at your leisure to choose a spell or switch the character or familiar. You only control one character in battle, the rest are AI-controlled. You can, however, switch between the three party members. You can give loose orders to the other two (Attack same target, Heal, etc.), but can’t have a very specific input on their actions. Unfortunately, AI-controlled allies aren’t particularly clever. Familiars are creatures you catch, evolve, and use to fight throughout the game, which gives off a slight Pokemon vibe, but nothing drastic. It’s cool that you’re not forced to use familiars, you can also use your character, and you WILL a lot, especially during boss battles (for instance, Oliver’s spells are very powerful, especially in the end-game). 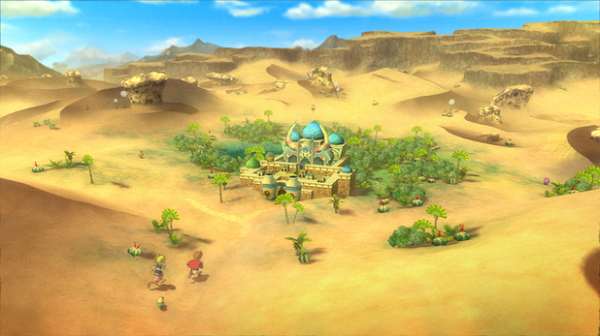 There is an overworld you can freely roam, it is quite big, and another feature that reminds of the JRPGs of old. You can see the enemies on-screen, both in the overworld, and in dungeons, and can sometimes avoid them. Don’t get too crazy with that, though, as it’ll inevitably force you to do grinding later on, when you find yourself getting killed even by ordinary enemies, much less bosses. Unfortunately, in some places near the end-game, you’ll find yourself overwhelmed unless you’ve done some grinding. I had to do so several times in the second half of the game. 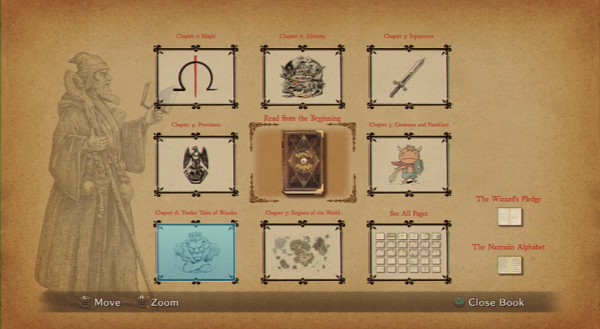 The Wizard’s Companion, a rather big in-game guide-book that was actually available as hard copy in the Collector’s Edition, will be something you’ll consult quite often. There are game hints, info about the world and creatures, and plenty of other things, like the short stories I mentioned before. Sometimes, you’ll need to consult it to read Nazcaän, the lost language of the ancients, which you’ll need for some quests and tasks. 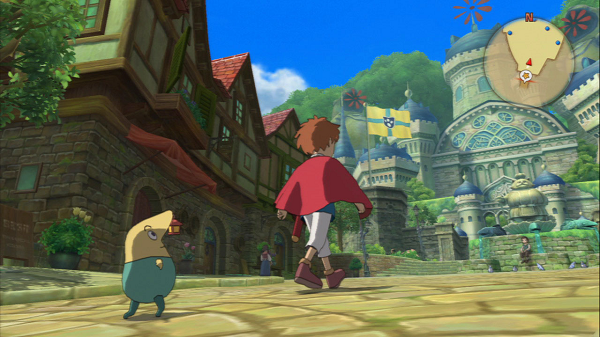 There are plenty of side-quests in Ni no Kuni, but they are rather repetitive. There are two main types – “fixing” heartbroken people, and bounty hunts. The former involves using a special skill only Oliver possesses – the ability to, for instance, take a bit of confidence from someone who has an abundance of it, store it in your locket, and then give it to a person who’s lacking it. The latter is simply hunting down some particularly strong monster, or a group of monsters, and destroying them in battle for a reward. There are “merit stamps” awarded per quest, and 10 of them fill up a card. You can exchange several cards for some upgrades – for instance, the ability to jump (which does nothing aside from being an extra animation), or cheaper cost of reviving after a game over (the normal cost is 10%), or stronger stats, etc. 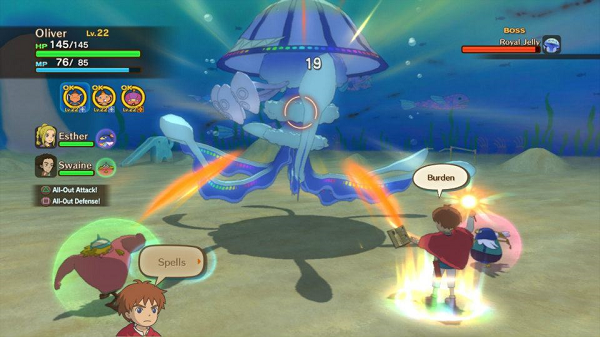 Boss battles are easily the game’s highlight – they are quite epic, and most of the bosses can use quite devastating attacks. You’ll need A LOT of MP to beat bosses, and the bad news is that MP-restoring items are ridiculously expensive in comparison to the others. In consequence, you’ll find yourself struggling for money relatively often in the game, though, by the end, it’ll not be a problem. You can guard against bosses’ special moves, and reduce the damage a lot. Usually, a powerful attack/spell (both yours and your enemy’s) takes charging, and, while the boss charges, you can select the “Defend” option. There’s great satisfaction when you manage to finally bring the boss’ large amount of HP to zero and win the battle. 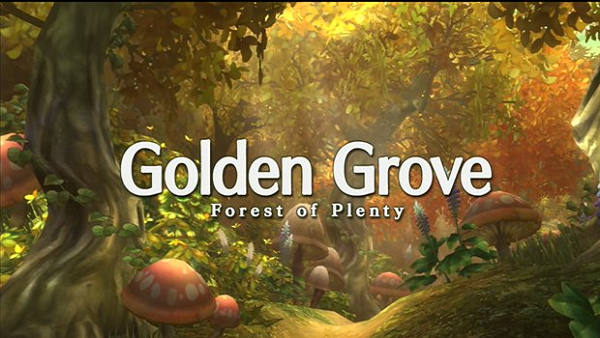 Again, the graphics and animation are Ni no Kuni’s strongest points, by FAR. Studio Ghibli’s incredible talent shows. Character design is interesting, the familiars, while still giving off a slight Pokemon vibe, are more unique, and the various creatures of the world (because there are more than just humans) are quite neat, with the Yule’s tomtes being incredibly cute. The world is also marvellous! There are so many different locations, extremely different in looks. From the fires and lava of Old Smokey volcano, through the wonderful forest of Golden Grove, to the icy Glittering Grotto… And the towns, too – each one is unique, my favourite probably being the fairy-tale steampunk Hamelin. 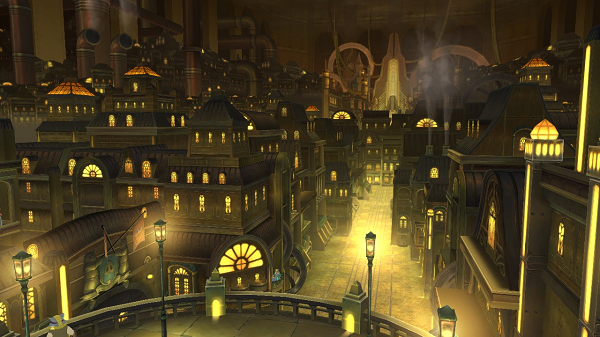 The soundtrack by Joe Hisaishi and Rei Kondo is nowhere near that quality, but still enjoyable, overall. The music fits the atmosphere of the game quite nicely, with cheery tunes in lively towns like Ding Dong Dell, and more mysterious themes in dungeons and the like. While there were no songs I was particularly impressed with, I must point out the presence of some orchestrated tracks, which adds to the grand feel of adventure. The song I picked is called “The Golden Grove”, playing in the aforementioned forest.

Despite the undeniable beauty, Ni no Kuni still doesn’t deliver nearly as much as I hoped for. The story is rather weak, if cute, the characters are not particularly memorable, and the battle system, while relatively fluid and fun, is soured by the rather poor AI. The fact you need to grind at some points, which can be easily avoided by developers matching enemies’ levels with yours, at least until some point, is also a clear negative. There’s no excuse for being forced to spend 10% of the play time grinding. Even someone starved for a good seventh-generation JRPG like me could not enjoy something like that too much.

Yes, Ni no Kuni’s world is wonderful to look at. It’s like a fairy tale, and I can imagine someone in their early teens would really enjoy it. But a kid’s game can hardly win me over… Like many other JRPG fans, I’ve come to expect something more of them. Something that could hook me. Ni no Kuni begins in a promising manner, but, after that, the excitement is limited strictly to discovering new towns and areas of the world… Studio Ghibli’s efforts have paid off, but there’s just little more the game can stand on. It remains far from the best JRPGs in terms of overall quality.