It was inevitable. After three console games, I had to also play the other Katamari gem within my reach – the PSP game. I was wondering how it would work given the presence of only one stick on the little machine… But a solution had been found, and it wasn’t a half bad one. And I was pleasantly surprised to see that, despite the smaller scale which often showed during gameplay, this game was better than Katamari Forever, and came relatively close to the excellence of the first two. The style was much like in the first two, with the exception of the already mentioned scale limitations due to the weaker hardware. Thus, I enjoyed it more than the cel-shaded look of Katamari Forever. 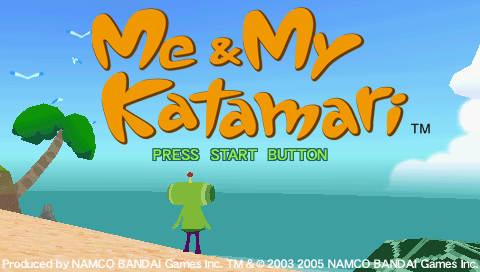 Me & My Katamari brings the glorious series to the portable world, and does so quite well. Despite the hardware and controller limitations in comparison to the PS2, the essence of Katamari is preserved, and players can enjoy The King and Prince’s antics in a new way. Sure, the story is less serious (yes, I said this) than the story of the first two games, but there’s lots of variety and new things to be enjoyed, particularly in the specially themed stages. And an already great experience is made even better with the brilliant end-game surprise – actually the best one out of the four in the Katamari games I’ve had the pleasure to play.

SOME MORE FUN WITH FAMILIAR FACES 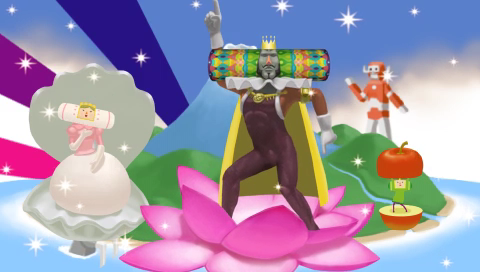 Me & My Katamari’s story reflects the game’s smaller scale, but successfully retains the humourous theme of the series. It’s very simple – The King and the Royal Family are on a summer holiday at sea. However, as we know, The King is quite big… And, while he’s having fun in the ocean, splashing gigantic amounts of water and creative massive waves, he destroys the islands of some innocent animals living around! As usual, he is not particularly regretful, but instead sends The Prince to clean up his mess. Well, it’s not exactly that way this time – it is the animals who come to Prince’s Island one by one and ask him to create an island for each of them, one by one. How are those islands created? By rolling a big enough katamari, of course. The King handles the rest with his Royal Puff! 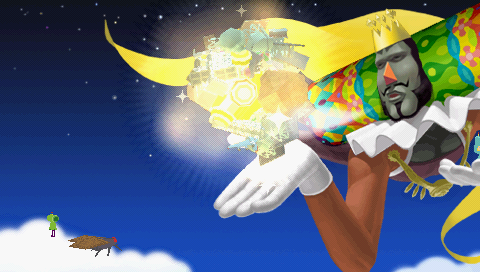 From the characters we’re familiar with, we’ve got of course The King, The Prince, The Queen and the numerous cousins… No Hoshino family or Jumbomen this time. But we’ve got the animals, and some of them are quite funny. Their requests are reminiscent of the human Katamari fans’ requests in We Love Katamari, but some are pretty interesting and lead to more fascinating stages. My favourite, by far, is the gorilla astronaut, whose stage is also one of the best in the game (the only ones rivaling it being, of course, the stages where you can make the katamari really huge 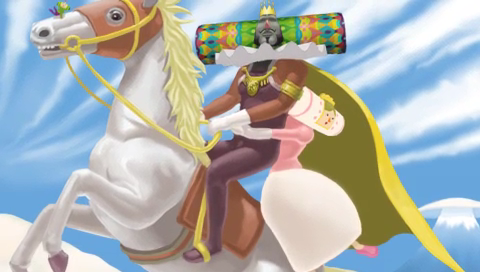 SMALLER, BUT NOT LESS SIGNIFICANT 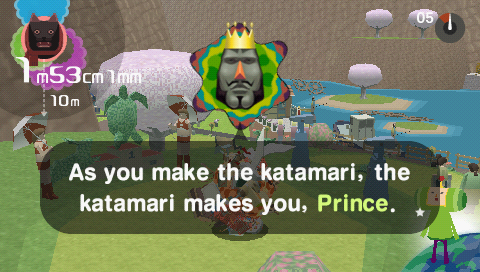 The scale of Me & My Katamari is definitely smaller. PSP’s hardware may not be much weaker than PS2’s, but probably there’s the factor of developers not being so well used to it when making this game. That leads to stages where you can get considerably big (i.e. most stages) being split into two, three or sometimes even four parts. As you reach a certain size, your katamari is magically transported to the next part, where you continue growing it. This is nicely explained with changes in time (e.g. morning -> noon -> evening).  Sometimes, you are in the same stage, but bigger things get drawn on the screen, corresponding to your katamari’s size. Things getting drawn in the distance as you play is something you should get used to in this game, by the way. Still, even if it’s in a few steps, you can get eventually your katamari huge, and this is what matters most in Katamari! 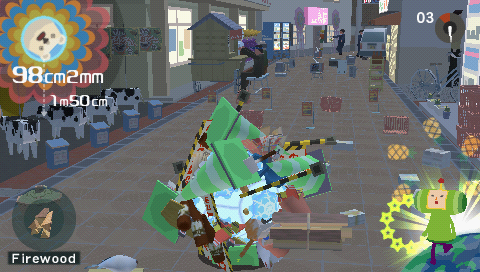 Control is different in this game – there is no second stick on the PSP, so you need to use the four buttons in its place. And, for symmetry, it is most convenient to use the directional buttons instead of the stick, too. Thus, instead of being able to move freely in 360 degrees like in the console games, you are stuck with 8-directional movement, but fortunately the game’s difficulty is forgiving enough so that this doesn’t matter that much. As for the stages themselves, animals have varying requirements – fast island, tasty island, etc., which means more points are given for items of the particular type. But, aside from the “special” stages on the Volcano Island, you only need to reach the required size to pass the stage. Score is secondary, as it is in the other games. Of course, obtaining a score close to the 100-mark always feels good because you know you’ve played through the stage in an optimal way. 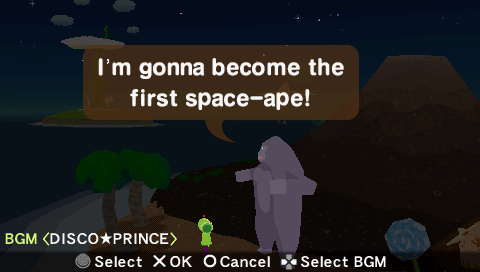 The “special” stages are the biggest treat the game has to offer. They are different, and thus more fun. My favourites are, as I mentioned, the gorilla stage, where you have to gather enough fuel to launch his rocket into space, and also the camel stage where you need to find valuable items in a very sandy desert… These special requests feel more important. They also take place in stages unseen in any other katamari games, while everything else (not to mention the music) feels like a bit of a rehash. That is not to say other stages are completely the same as ones we’ve already seem. They are just similar. But they also repeat quite often – I think there’s a stage I’ve played 4-5 times while helping different animals. 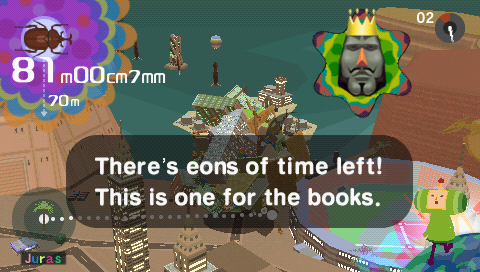 Aside from the main gameplay, there’s the usual Katamari fluff – presents to be collected in stages, which allow you to customise your character’s appearance, cousins to be rolled up and later switched to, if you desire to use a different character… There’s the Seaside Memorial where you can listen to music and watch cutscenes. Once you beat the game, you can also revisit the ending surprise there – another of the game’s main draws in comparison to other Katamari games. Don’t expect anything particularly fancy, but it’s a nice change of pace. The “punishment” mini-game when you fail a stage isn’t much fun. 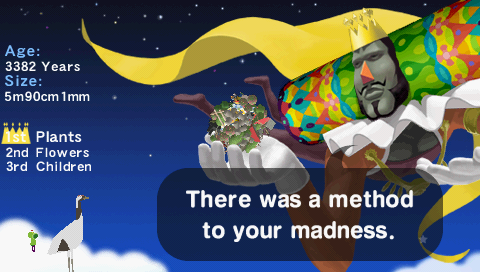 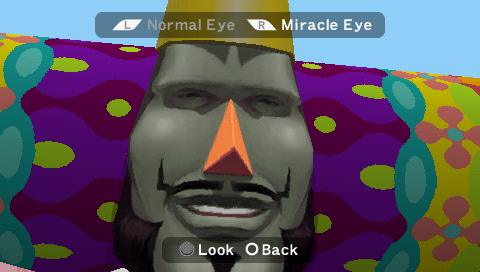 Me & My Katamari looks more or less the same as the PS2 games. I mentioned the drawing distance issues, and the splitting of stages into several parts, but, aside from that, it looks exactly the same! It looks like Katamari is supposed to look. No cel-shaded nonsense like in Katamari Forever (not that the hardware could handle that, anyway). The King, The Queen and The Prince are glorious as always, especially in the cutscenes, the animals have simple models, as expected of a Katamari game, but well distinguishable nonetheless. It’s standard Katamari fare, which is to say, good! 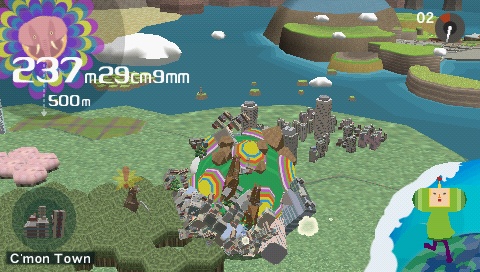 The music can be either a good or a bad thing, depending on your perspective… There are only a handful of original tracks, all the rest (and particularly the music during stages) is straight from the two PS2 games. I considered it great because I love pretty much all of the first game’s music, and they happened to use some of my favourite tracks from the second soundtrack, like “Everlasting Love”. But the near lack of original music could be seen as a disappointment, too, and I can respect such an opinion. Which music did you expect me to pick to illustrate this review? You were right – it’s the game’s main theme, which plays in the intro, “Katamari on the Funk”!

Me and My Katamari OST – Katamari on the Funk

Me & My Katamari is a lesser game than the PS2 entries in pretty much all respects. But it also adds to the series. The story is simple, but fresh, and it fits the Katamari universe nicely. The King gets his brilliance enhanced even more… The new stages, particularly the special ones, the sea theme, and even the few new songs, add a lot to the Katamari spirit. For a fan like me, it was a joy to play and grow my katamari more and more. Yes, there’s repetition, and the regular stages’ requirements are pretty much insignificant fluff. So whether you enjoy the game ultimately depends on whether you’re really into Katamari. And I am – the two PS2 games, along with Metal Gear Solid V: The Phantom Pain, were by far the essence of my gaming year 2015. Ultimately, for a handheld entry, Me & My Katamari is very satisfying.

Tagged: bandai namco, katamari, me & my katamari, namco, playstation portable, psp, puzzle, the king of all cosmos, the prince