The Longest Journey was a game I had long been looking forward to playing… Being a point-and-click quest/adventure game – a genre I’ve barely played any of, but respect quite a bit, it was bound to be an excellent entry point. Besides, it had received nothing but praise from critics and gamers alike. It was bound to be epic and fun… Well, it IS epic, but the fun was only here and there. The story was very well thought out, and is fascinating on paper. But the storytelling and overall execution were sorely lacking, with a lot of pacing problems and 2-3 ridiculous puzzle solutions that will force you to look them up unless you have nerves of steel and the patience to try using every item everywhere. Sadly, while impressing in unexpected aspects, The Longest Journey also fails in places that should’ve been a piece of cake to do right. 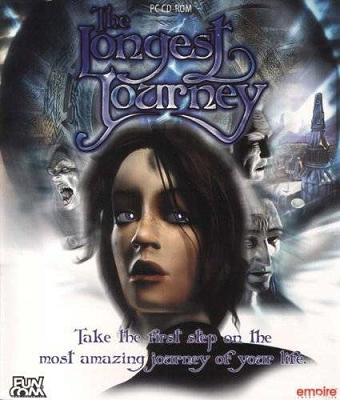 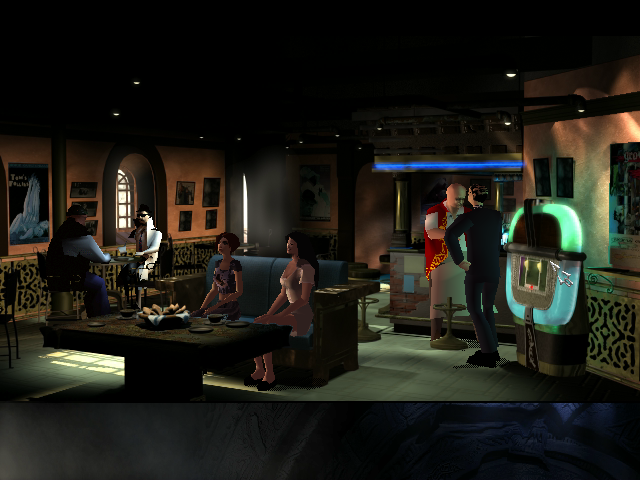 The story is easily The Longest Journey’s strongest point. More particularly, the world its author has built… That is, worlds. The heroine, April, actually travels through two parallel worlds – one based on science, the one she knows – a futuristic version of Earth, and one based on magic – an entirely fantasy setting. While locations you can visit in each of the worlds are quite limited (but that is simply how the game works, it is a very linear experience), the Brave New World-inspired elements of the futuristic world on one hand, as well as the various humanoid species you meet and talk with in the fantasy world on the other, certainly make an impression. There has been a good amount of planning. 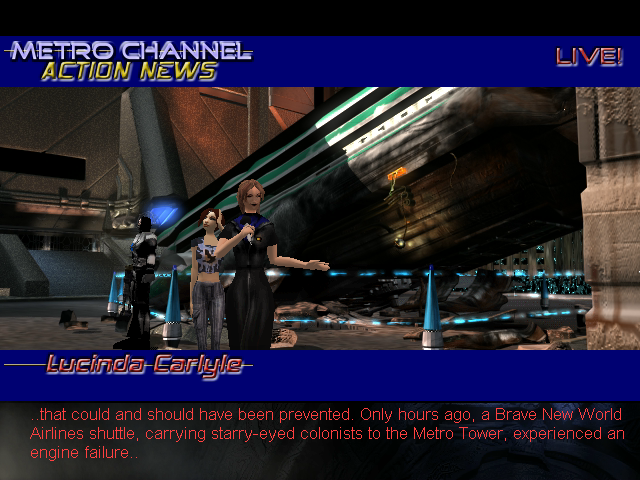 The story itself is relatively engaging – despite being a seemingly normal girl, soon it’s revealed that it’s on April to save the two worlds from destruction by evil powers. There are more knowledgeable people who will help her along the way, and help build her character up to the task. After solving many puzzles and tackling one challenge after another, she will slowly piece together the truth about the whole situation. A lot of humour has also been incorporated into the dialogue, and most of it seemed rather flat to me, but I am also not the easily amused type. Sadly, the big problem comes with pacing. The first half of the game was much longer than the second – in the beginning, it took a long time to pass a chapter, and near the end, some chapters lasted mere minutes, offering just one or two puzzles… 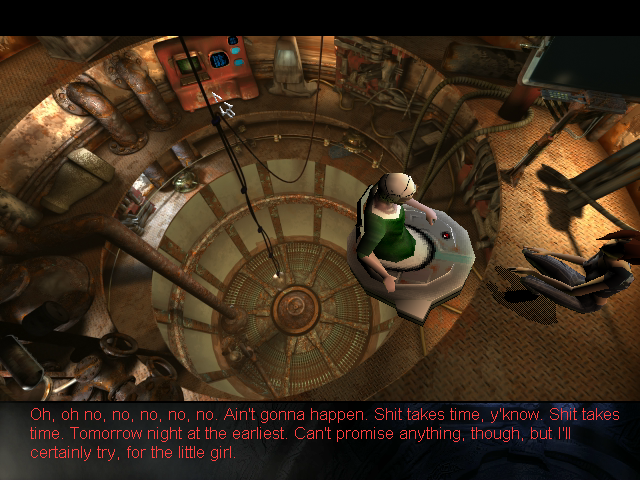 As for the characters, April was rather impressive – she’s not particularly likeable, but she was quite well written. The annoying behaviour and way of thinking she occasionally displays are actually quite fitting, considering she is just a teenager who’d only recently left home and started living by herself. The one character I actually liked is Cortez, April’s mentor. The hacker Burns was also cool. April’s sidekick, Crow, cracks a funny joke here and there, but is a bit annoying as a whole. Still, you can’t really dislike a smartass talking bird. The rest of the characters were practically placeholders, including the villains. The game failed to properly explain how the villains’ goal was worse than maintaining the current situation, which is what April was tasked with doing. 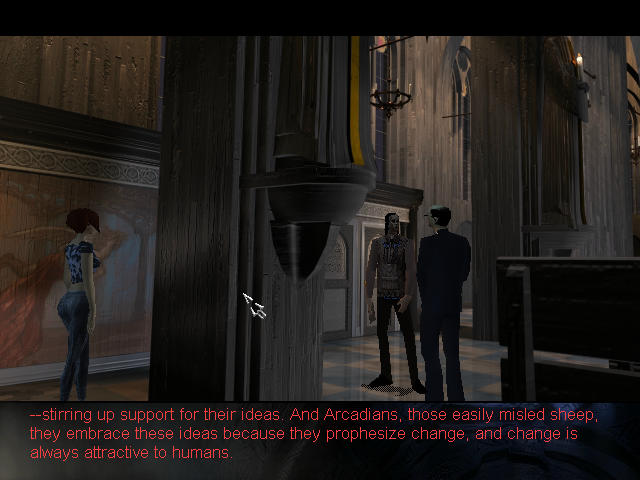 PUZZLES GO DOWN IN DIFFICULTY 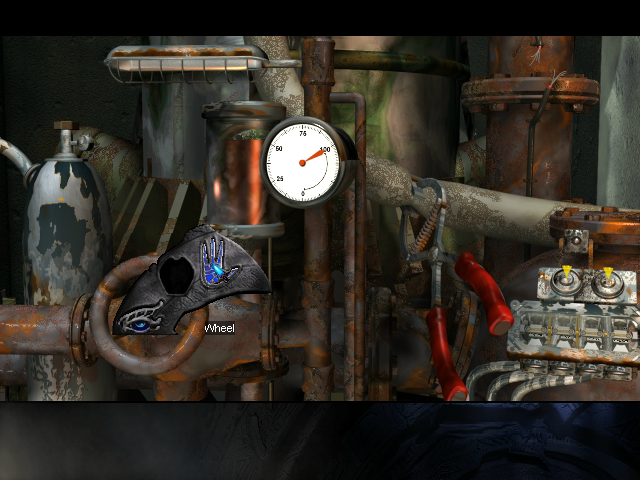 I needn’t write much about The Longest Journey’s gameplay… It’s a typical point-and-click adventure where all you need to do is solve puzzles. There’s actually no Game Over screen – I don’t know if this is standard for the genre or what, but it’s rather weird. You can’t fail. You can only lose time figuring out puzzle solutions. All you do is go around, talk to people, and solve puzzles. And it’s funny because, much like the chapters’ length, puzzles’ difficulty goes down as you progress, instead of up. This is very counter-intuitive and could probably make people give up early in the game. Solving puzzles is done by using the appropriate item from your inventory on the appropriate place or person. Sometimes, you need to combine items in your inventory before using them. There are quick keys for cycling everything (“A” and “S”), so, if you want to be cheap and not think too much about solutions, just cycle all items on all interactable people and spots on your screen… 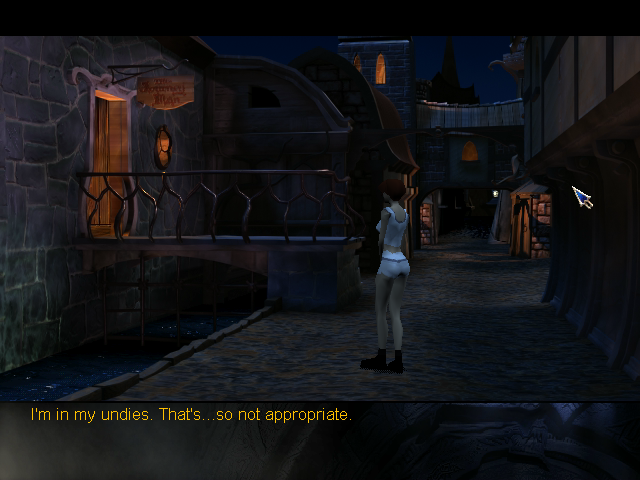 The most infamous puzzle of the whole game is actually in the second chapter. Ironically, I solved that one on my own and later got stuck on supposedly simpler ones – but believe me, there are one or two solutions that simply make zero sense and you can’t realistically be expected to figure them out logically, without using the aforementioned cycle method. Importantly, the more items in your inventory, the harder it is to solve puzzles – and, you guessed it, your inventory gets progressively smaller as you approach the game’s end. 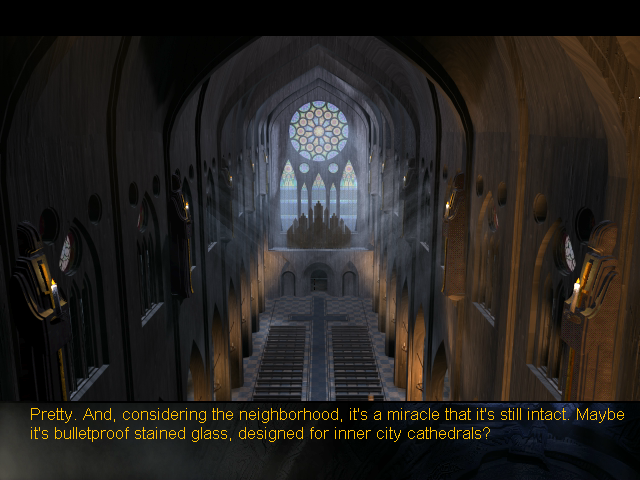 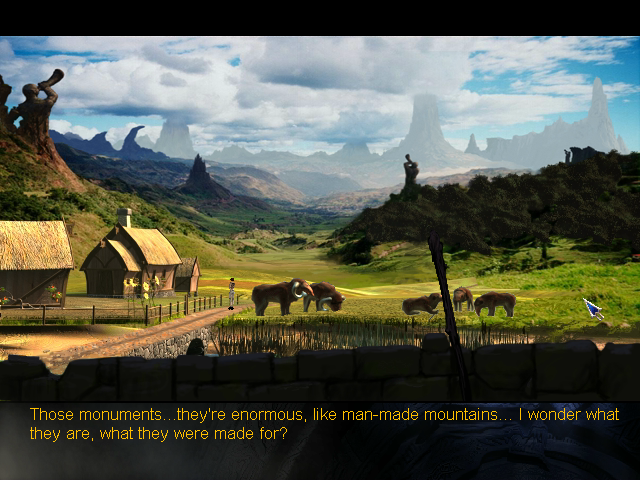 Visually, the game provokes mixed reactions. On one hand, we have pretty pre-rendered backgrounds for all locations April can go in. They reminded me of Final Fantasy VII… Except this game is 2 years older. Still, for a point-and-click game, it’s probably the right choice – the character models look quite ugly today, while many of the backgrounds are nice. The FMVs, though… They are rather laughable. I can’t understand this issue because FFVII’s FMVs in particular still look really good today. It’s a different style, but still… The Longest Journey’s probably looked relatively good in 1999, but today they are pretty bad. 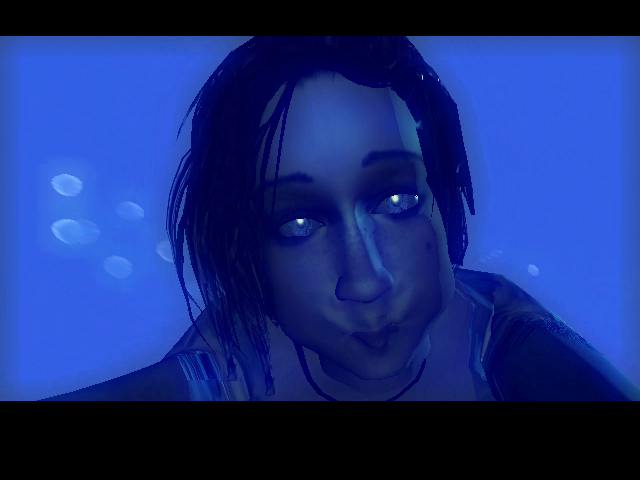 Voice acting is one of the game’s strong points – first, it’s nice that it has any at all, considering its age. And then, it’s pretty good, despite actually being a handful of people doing a bunch of voices each. April’s voice fits quite well, same for Cortez, Crow and even the villains. Can’t say much good about the soundtrack, though… To be honest, I can’t remember a single song from this game. It’s all rather generic atmospheric fantasy music. And my choice illustrates that quite well – it’s a song called “Marcuria and the Northlands”.

The Longest Journey Soundtrack – 07 – Marcuria and the Northlands

The Longest Journey largely failed to meet my expectations… I have to admit I actually took about 2 years to beat this game. I stopped for long periods of time at some points, until I finally forced myself to finish it during this last few weeks. Obviously, the story, while good as a whole, wasn’t good enough to hold my interest. Some illogical puzzle solutions also turned me off. But, while the game proved to be nowhere near what the critics were saying, it wasn’t all bad. I couldn’t help being impressed with the magnificently crafted game universe, and the voice acting. While I can’t in good heart recommend this game as essential, it could probably be a nice experience for people who are into the point-and-click genre.