After the incredible experiences with the first two Katamari games, it was only natural to move on to the series’ PS3 outing… It was always going to be a very, very tough task for Katamari Forever to live up to their excellence, but hey, We Love Katamari managed to improve upon the first game in many ways. Unfortunately, Katamari Forever offers almost nothing new, and its Japanese name, “Katamari Damacy Tribute” gives a good explanation why – it is a “greatest hits” kind of game, which mostly reuses already existing levels from the first two games, offering merely a few new ones, and a nice cel-shaded coat of paint. 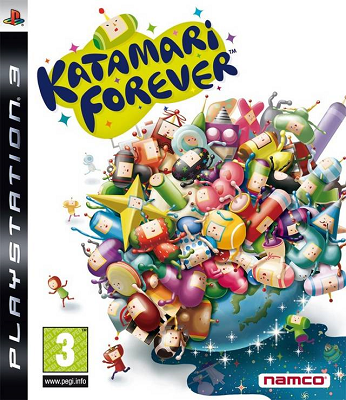 Still, Katamari Forever sticks to the tried and true formula of FUN that makes Katamari stand out among all other games. That means it’s still well worth playing. Some things disappointed me, such as the very limited ability to play co-op – only three such levels are available. Still, insistent on playing through this game with my wife, we decided to just take turns playing the single player levels until we beat the game. The challenge remains consistent with the previous two games – most levels shouldn’t be too hard, but some will really test your skills. It never gets old to start with a 1-metre katamari and eventually build it up to several kilometres.

Katamari Forever delivers yet another entertaining story. It is, of course, not particularly complex, but it’s highly amusing. The King of All Cosmos has fallen unconscious after showing off his jumping skills to his son, and bumping his head into a giant meteor… He’s lost his entire memory, he cannot be woken up, and something must be done, or the universe would be thrown into chaos. The Prince and cousins decide to build a robot to do The King’s work… And they succeed! But naturally, the RoboKing is only a temporary replacement… The true mission is to restore The King’s memories, which The Prince and friends do little by little (by replaying already familiar katamari levels). In the process, you will learn more about the RoboKing – the poor creature that just never stood a chance of achieving The King’s glory or popularity. 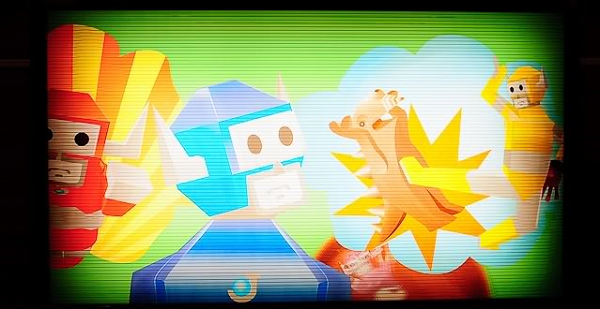 At the same time, a little side-story flows, which features the heroes/action figures fans of the series have already seen – the Jumbomen. They fight to save the universe, and their heroic, if rather random deeds, are sure to provide some much-needed laughs and awkward moments on the breaks between the levels. 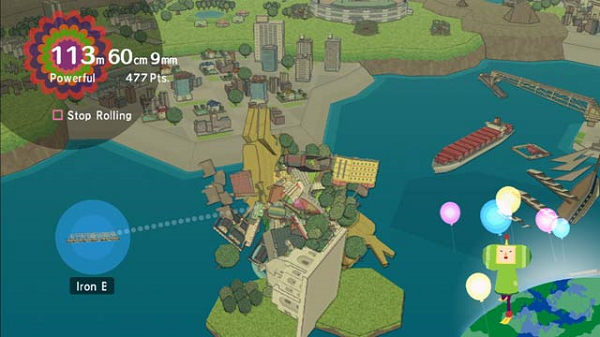 In case this is the first Katamari review of mine you come across, here’s a basic description of Katamari gameplay. You start the level with a ball that can roll over (and snowball along) any objects below a certain size. The larger the ball gets, the bigger objects you can roll over. That’s what Katamari is all about, that is its essence. And you keep rolling, and so on, and so on, until you fulfill the requirements of the level in question. Usually, you have to reach a certain size of your katamari within a certain time limit, but there are also levels with more creative requirements, such as rolling a number of a particular type of objects, getting a sumo wrestler big enough to beat his opponent, or even the dreaded campfire level where you need to keep a katamari burning while also making it large enough to light a big campfire. 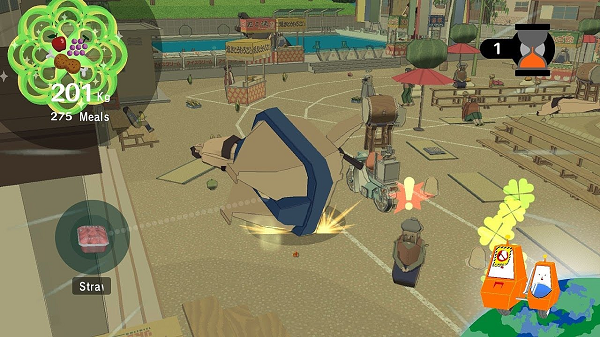 On the screen, there’s indication about the katamari’s size, the time remaining, the object you have just rolled in. There are, like in We Love Katamari, cousins and presents to collect in each stage. Cousins are once again playable – should you prefer to play as one of them instead of The Prince, feel welcome. Nothing changes from gameplay perspective, playing as a different cousin is just a question of cosmetics, as well as the presents you collect that can be used as accessories on The Prince or cousin of choice. After you clear a stage, your performance gets a score… But even just having cleared the stage is good enough, I think. The alternative forces you into an unwinnable game of falling rocks as your “punishment.” They break into two upon touching the ground, Pang-style, and you must avoid them until they disappear. 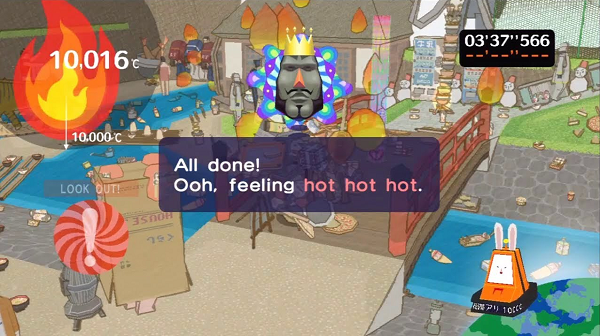 There are still some new things for people who have played the first two games… But most of them are actually from the 360 game Beautiful Katamari, such as the clever “shopping” stage where you need to roll up inexpensive objects so you can accumulate as many as possible before your money runs out. There are only several entirely new stages in Katamari Forever, two of them appearing in the very end of the game’s story mode. One of them is pretty clever, though – a level called “Hot Stuff”, where you need to get your katamari up to 10000 degrees by picking up hot stuff and avoiding anything cold. Naturally, the stage takes place in a wintry setting, with snowmen and penguins around, so your temperature gradually drops just by being outside… 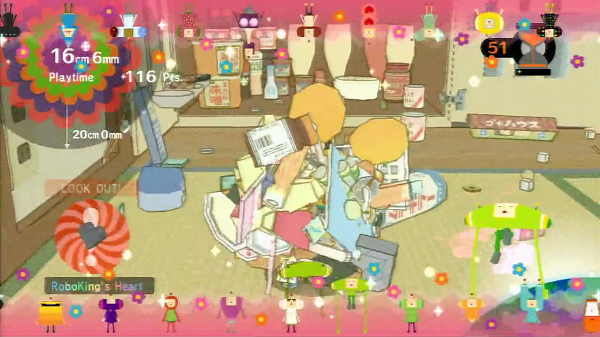 There are a couple of new gameplay features, too. You can make your katamari jump by flicking the Sixaxis controller. While it’s cool, I’m not sure it is ever actually needed in any of the stages – however, it can help you get to higher places faster than the method used so far – slowing rolling up on walls. In the stages, aside from cousins and presents, you’ll occasionally find also pieces of RoboKing’s heart… Picking one of those up makes your katamari a magnet for all the stuff around which is smaller than it, helping it grow much faster. There’s also a fun ending mini-game, in the style of old-school Namco arcade games. 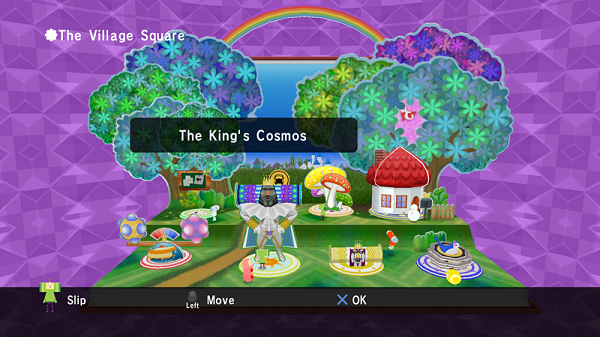 The downgrades certainly disappoint… I already mentioned the presence of just three co-op stages. I really don’t understand why they didn’t simply keep the ability to play through all single-player stages in co-op, like it was in We Love Katamari. This made me take turns playing with my wife, which was still nice, but not as cool as playing together. There is versus mode, too, but it’s nothing special either. The “Village Square” select screen is also much less exciting than the “Select Meadow” of We Love Katamari, or even the first game’s “The Prince’s Home Planet”… No longer can you chat with Earthlings and hear their motives for asking you to play this or that level. It’s simply selecting a stage and then hearing RoboKing or The King’s introduction before you start. 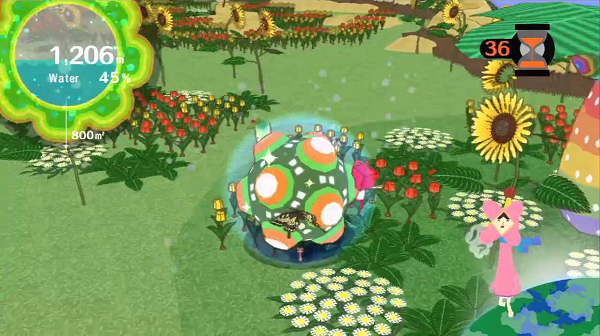 Katamari Forever is on a more powerful system, and thus no longer forced by hardware to use simple, low-polygon models, especially with plenty of objects on screen (which is practically always the case during stages). However, the Katamari style had already been well established before the new hardware appeared, so the new games cannot stray too far from it. What Katamari Forever does is keep the (relatively) simple models, but make them prettier with a bit more detail, and cel-shading. Cel-shading suits the light-hearted Katamari theme, but I felt it also kind of killed the low-poly charm of the PS2 games. Ultimately, it’s a matter of personal feeling, but I’m more fond of the PS2 style, even if it is interesting to see old stages get a facelift. 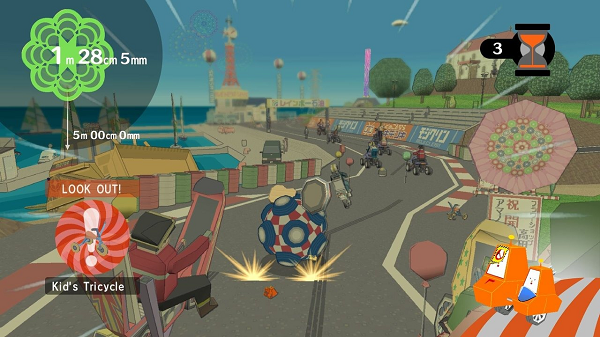 The music of Katamari Forever is also mostly remixes of songs we’ve already heard in the previous games… And not particularly good ones, either. Usually, a couple of songs are combined in a single stage track. There are some new themes, as well, but nothing particularly catchy. The first game certainly remains King, as far as the soundtrack is concerned. I’ve picked the stage clear theme, called “Cosmos”, to illustrate the review. I still think I prefer the We Love Katamari stage clear music, but this one is certainly also pretty cool and calming.

There are plenty of aspects in which Katamari Forever fails to match its amazing predecessors, and few where it does better… But it’s still a full-fledged Katamari game! And when The King of All Cosmos is involved, FUN is guaranteed. Yes, the stages will be quite familiar to those who have played the previous games, but it’s fun revisiting something you like. The level of challenge is about the same as the first two games, with several of the stages being relatively hard and requiring a few retries to be completed. It’s pretty sad that you can’t play through the whole game in co-op mode anymore, but I was still satisfied with what I got.

Apparently, Namco have not found it sufficiently profitable to continue the series with new full-fledged console/PC entries, but Katamari is still a fresh idea and could produce a good couple more games at least… It remains to be seen, but series creator Keita Takahashi has been more than happy working on new, even more quirky projects. Hats off to him – the industry can certainly use more people with his level of creative talent. With or without new games, Katamari will remain legendary – certainly one of the most interesting and intuitively fun franchises in the history of the medium.