The moment Journey came out, it was an instant success, with fans and critics alike singing praises for thatgamecompany’s new creation. Like with their previous hit, Flower, the main qualities pointed out in reviews were the unique art style, the sheer beauty of the scenery, and the minimalistic storytelling. Despite the short length (reviews mentioned 2 hours), people around the world loved it, fans drew pretty art based on the game’s world and characters, and word of mouth contributed greatly to its success. And now, it’s my turn to share my thoughts of one of the 2012 gaming phenomenons with you. I got my hands on this game thanks to my girlfriend’s sister who gave her a PSN voucher as a birthday present, with the explicit instruction to buy Journey. The $15 price the game launched, and is still sitting at, didn’t seem justified to me, considering its length. I was going to wait for it to drop to at least $10, but, thanks to the aforementioned circumstances, I was apparently going to play it in the year it actually released.

In the beginning, I thought that people had praised this game for a good reason. The visuals, while not going into much detail, were really beautiful, much like in Flower. I spent a minute or two to admire the scenery before even starting the game. And this stayed consistent throughout the game – every new environment was as pretty as the previous. The atmospheric music and sound effects also impressed me… And the protagonist, with his strange clothes, long scarf, and Final Fantasy black mage-like face, seemed mysterious and cool. But we gamers know that all these things complement a game, they are the side-dish to the meat…

A BASIC TALE OF A PILGRIMAGE

Journey’s story is minimalistic, but some thought has definitely been put into it. You wake up in a desert, surrounded by endless sands, with a lone mountain peak in the distance, which is apparently your goal. Just a bit later, you will find out that this journey is transcendent, religious in its essence. The higher powers compel you to reach the peak, the ultimate goal. And you will have to endure many hardships in order to do so. But it’s not all bad – you will meet companions and strange creatures along the way, you will help each other in your quest. In the online mode, you will meet real people playing the game at the same time. After each distinct part of the journey, a stylised drawing will tell you what lies ahead. And you must carry on to the eventual conclusion. A conclusion that is quite personal – some will like it, some will not. I’m in the latter camp. It is just not for me, I do not approve of the general message it carries. Perhaps it is thatgamecompany’s vision of human life and its meaning? I cannot say more without spoiling the game…

But, in essence, there really isn’t too much of a story – at least one explicitly stated. You are free to fill the blanks yourself – what kind of world this is, what kind of creatures the protagonist and his tribe are, what the origin of the higher powers is, what the cloth creatures you will encounter are… It’s one big mystery of a game. Shadow of the Colossus was a clear inspiration – in this and other aspects. Except Shadow of the Colossus’ ending provides much closure, Journey’s – not so much.

YOU ARE ALONE… SO ALONE 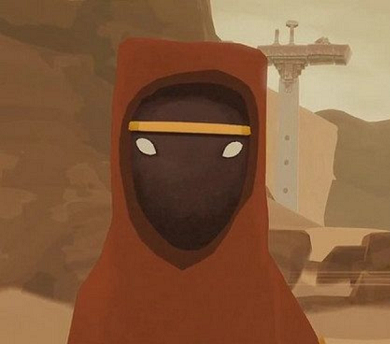 Yes, if you play online, you will meet companions much like you on your journey… But they come and go – if either of you gets left behind for a while at some point, you will find yourself with a new companion soon after. Unless you stick close together, you can’t really go through the whole journey as friends, as a party. Journey’s harsh reality will separate you the first chance it gets, and you will be paired up with another random person, starting your relationship from scratch.

Not that there’s much of a relationship to be spoken of… You can only communicate with the other player via usage of a morse code of sorts – pressing Circle will emit a tone and a symbol above your head (different for each of the two players). The longer you hold the button before releasing it, the longer the tone. It’s kind of cutesy at first sight, but essentially useless. Of course, people who are creative and good enough of a team could make great use of it, like play a song together! But it’s still rather weak. I understand that it is fully intentional and that that is simply how these creatures communicate with each other, but it just doesn’t resonate with me. I find it a bit childish – not that this could not be one possible theme of the game, too. So, ultimately, you are alone. You walk your own path, loosely guided by the higher powers, you encounter other pilgrims and creatures (the playful cloth creatures being actually one of the high notes in the game), but you soon part ways with them and it’s time to go on on your own merits. The vast environment imbues a feeling of insignificance, you are a small person against a huge world full of harsh tests, but you still passionately pursue your goal, you want to reach that peak and experience the glory of having achieved it. Is it a life worth living? Journey’s biggest problem has to be the gameplay. It’s just really dull. A lot of the time, you just hold the stick pushed forward as you progress. Your abilities are limited to jumping… And that’s it, unless you count the aforementioned communication with your partner. And even jumping is not possible unless you have “scarf power” to do so. It’s acquired in various ways, such as coming into contact with scarf pieces floating around at certain points (that reminds picking up petals in Flower) or simply being close to your companion. The more scarf power you have, the higher you can jump. But a jump consumes the scarf power and, once it’s depleted, you can’t jump until you replenish some. You jump higher by holding the button longer, but there is a limit to how high you can jump. Your scarf also grows the more you play.

The difficulty is non-existent. I don’t know if it’s even possible to die in Journey… In my experience, I do not think so. The worst that can really happen is losing your companion and the game replacing him/her. Then you just carry on until you eventually succeed. The huge, mostly empty environments will undoubtedly remind you of Shadow of the Colossus if you’ve played it, but sadly there are no boss battles or any kind of battles whatsoever (although you WILL be attacked by a massive monster – perhaps it is thatgamecompany’s way of paying homage to the PS2 classic). The worst thing about Journey is its short length. There is no excuse for a first-time player, and one who does not really rush through games, like me, to have his first playthrough last double digit numbers. Yes, the 2-hour length I had read about turned out to even be a generous estimate. Indeed, the game is meant to be played more than once, and, thanks to the multiplayer specifics, every next experience will be slightly different, your scarf will also keep growing and eventually you may even become “godlike” (I know I saw someone that way), you could also have fun trying to get all the trophies (most require specific actions you likely won’t do at once). But that’s just a poor excuse for making such a short game. Even just twice the content and playtime would have made the game much better, but it wasn’t meant to be.

We come to Journey’s main strength – its sheer beauty. As soon as you boot the game, you will notice it. True, you are a lone figure in a vast desert, but I’m sure you will quickly notice and be impressed by the sand’s gleam, for instance. Everything, absolutely everything in the game is drawn nicely and is pleasant to look at. The protagonist’s design works nicely, even if it is reminiscent of Final Fantasy black mages or Star Wars jawas. 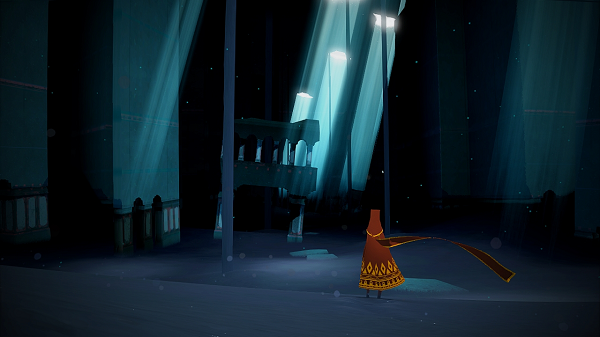 The art direction deserves praise, but so does the graphical prowess. Much like in Flower, things are not only beautiful, but also technically impressive. The lighting, the shadows, the animations, they are pretty much flawless. The artists and graphic engineers deserve a lot of praise, as their work contributes the most to making Journey what it is.

The music by Austin Wintory complements the artistic beauty nicely. It is mostly atmospheric, never standing out too much to distract you from the overall experience. The end credits theme is very pleasant, but, as usual, I have chosen something else so as to not spoil that moment. The song I’m including in this review is named “Road of Trials.”

WAIT FOR A PRICE DROP

$15 is just asking too much for Journey. As pretty and mysterious as it is, again, one playthrough lasts less than 2 hours and there is no real challenge. Even $10 is asking a lot, considering the fact that much longer and more entertaining games like Scarygirl cost as much. If I were you, I’d wait for a 50%-off sale at the least. Or you could get the Journey + Flower + Flow retail version, coming up in the end of August, priced at $30. At least that one has two additional games that are better than Journey, as well as some nice extras. Sadly, it won’t be available in Europe.

I frankly do not understand the massive worship Journey received by just about everyone who played it. Are video game critics that easy to impress – throw something beautiful and mysterious at them, and they will overlook the fact that it’s so short and there’s barely any gameplay and award it 10s? I like Journey in a way, it sure is a joy to look at, the setting is also quite cool. And I can see why the little story there is would add to that appeal – it is rather thought-provoking with its vagueness. But I cannot overlook the major flaws. The sum of all this comes to just slightly above the average. Journey is a nice, fascinating interactive experience, it’s simply not a particularly good game.