I occasionally try out demos, mostly on the PlayStation Network. Very rarely has a demo made me buy a game (the awesome early PS3 action-adventure Folklore comes to mind), but they’re a fine addition of the current generation, a real step forward from the years before when we only got demos rarely, through game magazines or the rare inclusions of a highly anticipated game’s demo in a previous game by the same company (think Metal Gear Solid 2’s demo in Zone of the Enders).

With this article, I’m starting a new section of the site, where I’ll share my quick impressions from demos I have found to be notable. And the first one I’ll write about is Retro City Rampage. 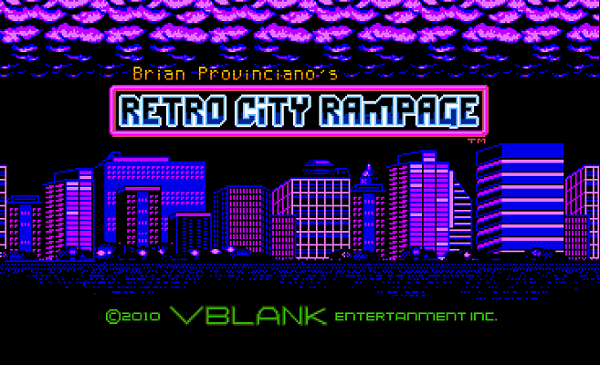 Retro City Rampage has been in development for a while now, I remember first hearing about it at least 2 years ago. As a rather ambitious indie endeavour taking a while, it was nice to have it actually seen through and released on almost all major platforms. I already knew the game would use 8-bit graphics, as homage to that incredible era of gaming, and the game’s initials, RCR, are already a play on one of the best games from those days – River City Ransom. But I hadn’t really watched many videos of the game, maybe a couple over a year ago, as it was never a main thing on my radar. Thus, the first two things that immediately struck me about the demo were the 4:3 classic resolution and the old TV-style scanlines. The former was a nice touch, with static pictures filling up the screen from both sides, much like if you play a Mega Drive/Genesis game from the PS3/360 collection in 4:3. The latter was a bit annoying at first, but I got used to it. Perhaps it can be turned off in the full game. 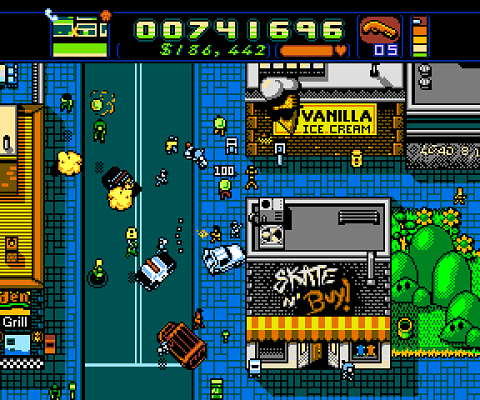 Anyway, I must say the game gave the impression of being full of charm. It’s a parody of GTA-style games – you play as a criminal, starting off as a mere henchman to one of your city’s criminal masterminds. You have to assist your boss in a bank robbery and escape from the police. Eventually, your character, simply named Player, comes across a time machine that takes him to a different time, though one not too different from the “present” he is familiar with. The game is evidently full of references from old games and general 80s culture, like Frogger, Contra, Sonic and Back to the Future that were seen in the demo. I’m sure I didn’t even recognise some of the references, but my favourite had to be the Teenage Mutant Ninja Turtles jumping out of a sewer and joining the police chase, trying to hit you with their signature weapons, as your character makes his escape. 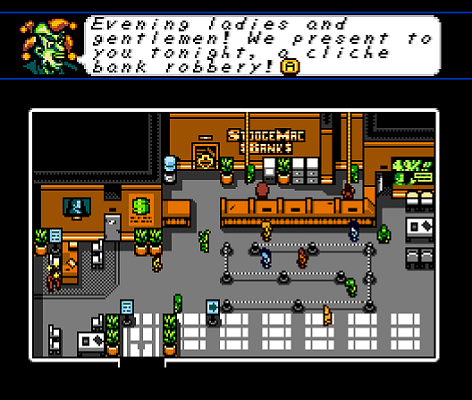 The situations the demo puts the player in are “on foot” and “driving,” with a couple of control schemes (simple and more complex, but with more options) being available for the latter. The game plays in an overhead view. Overall, controls were smooth, there were several vehicles, weapons and power-ups available, and I’m sure there are plenty more in the full game.

Despite my overall good impressions, I thought the price was a bit steep at $15. $10 would be a more suitable price tag, especially considering that games full of content like Scarygirl have launched at that price. Nevertheless, if you are thirsty for a humourous blast from the past with some modern ideas incorporated in it, you can give Retro City Rampage a shot.

RECOMMENDATION: WAIT FOR A PRICE DROP