I think I saw an ad of Far Cry 3: Blood Dragon on GameFAQs or something like that… And it made the premise quite clear, and it’s a premise that drew me easily. My family only got a VHS player in the early 90s (1993, I think), but the young kid I was at the time didn’t miss the chance to watch many, many action movies from the late 80s. From Schwarzenegger’s Commando to little-known flicks like A.P.E.X. (okay, that was 1994, but it’s one of the movies I remember for some reason), my young mind was quite enticed to watch the action heroes saving the world, especially in “near future” settings. And what do you know, Far Cry 3: Blood Dragon caters to exactly people like me. I downloaded and played the demo as soon as I could. 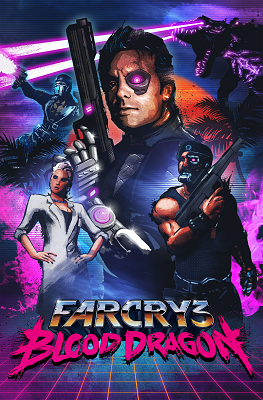 As soon as the demo starts, you see that the game is fully intent on staying completely true to what it’s advertised as – cheesy, over-the-top action in a 80s vision of the early 21st century, featuring the cyborg hero Sgt. Rex Colt (voiced by Michael Biehn, who played Kyle Reese in the original Terminator!) and his Japanese sidekick Spider. The year is 2007 and, at the very beginning, you proceed to fire at the enemy base using a gigantic gun mounted on your helicopter, which your sidekick flies, circling the base. So much for stealth. The game has got nothing to do with Far Cry 3, by the way, aside from using the engine. Nor do you need to own Far Cry 3 to play it. This is not DLC, it’s a game of its own, and I’m not sure why they attached the Far Cry 3 name to it, as it suggests you’d need that to play this.

Anyway, as you land and start your crusade through the base, you get to know the FPS mechanics the game offers. It’s pretty much a standard FPS, but the crazy setting makes it special. There are, of course, various guns, you can perform stealth kills if you get close to an enemy unnoticed, if your health is critical, aside from using healing items, you can heal yourself (which is, hilariously, Rex adjusting and fixing some wires in his robotic arm). Healing takes some time, though, and you could be killed before you manage to do it. As you kill some goons, you inevitably reach a boss – unfortunately, though, the demo doesn’t let you fight it – and that’s my one gripe with it. I played the demo on PS3, and maybe you know my stance on FPS games on consoles… They’re unplayable! But this is also available on PC, so I imagine it’d be even more fun there. But if I persevered through the PS3 one, you can imagine I had fun. 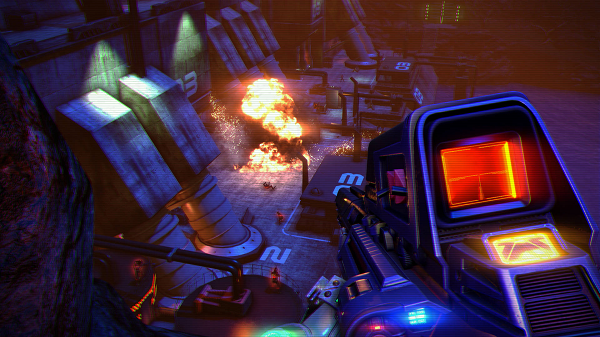 Far Cry 3: Blood Dragon displays a very nice sense of humour, including the tutorial and “hints” you’re given through the game. You’ll also notice a strange “scanlines” filter, perhaps intending to be reminiscent of VHS tapes’ quality on old TVs, but not quite getting the effect down in this HD era. Still, the “Tracking” loading screen does induce nostalgia.

All in all, it seems like a solid, FULL, yet budget-priced game, and it promises much more than what’s available in the demo, including laser-firing dragons. I think $15 for such a game is a steal, standard FPS or not. I have not bought it yet because there’s a lot on my plate, as usual, but I’ll be sure to snatch it as soon as it goes on sale, preferably on Steam. So yeah, if you want some VHS-era action and general hilarity, as the developers look at the era in a joking, yet lovable fashion, Far Cry 3: Blood Dragon may be just the thing!